Byron Merrill Rhodes, 78, of Marshalltown, IA, formerly of Zearing and Conrad, was called home to be with his Lord, Jesus Christ on Wednesday, November 25th at Mary Greeley Medical Center in Ames, surrounded by his loving wife and family. Funeral services will be at 1:30pm on Thursday, December 3, 2020 at Redeemer Lutheran Church in Marshalltown. Visitation will be from 1:00 to 7:00 pm on Wednesday, December 2, with the family present from 4:00 to 7:00 pm, at Anderson Funeral Homes in Marshalltown. Interment will be at the Conrad Cemetery. The family requests masks be worn for both the visitation and funeral services. The funeral service will be live streamed at Anderson Funeral Homes Facebook page. In lieu of flowers, memorials may be directed to the Byron Rhodes Memorial Fund.

Byron was born March 7, 1942 to Merrill and Doris (Bowlin) Rhodes in Marshalltown. He attended grade school in St. Anthony and graduated from Zearing High School in 1960, often riding his horse two miles a day to catch the school bus to ensure he could play baseball and basketball in the Zearing school district. He then attended junior college at Ellsworth where he played basketball and baseball, with his team making it to the 1962 junior college World Series. He was inducted into the Ellsworth College Hall of Fame in 2008. While at Ellsworth, he met his partner for life, Sandra Knavel, and they married on June 2, 1963. Byron attended Northwest Missouri State in Maryville, and with a little help from Sandy, he graduated in 1964 with a BA in Education. His first teaching job landed him at Starmont School District for two years before moving to Conrad in 1966. He taught junior high science and high school biology until 1980, when he left teaching for farming. With teaching came his true passion — coaching. He coached high school baseball and high school boys and girls basketball. His love for the game of baseball endured for 20 years on the field and a lifetime off the field. Never will we fully understand the impact he had on so many young lives. He started and coached the Conrad/Union Post Legion Baseball team as well as Marshalltown Community College baseball during his career. His career high school baseball wins were nearly 400. He was a charter member of the Iowa High School Baseball Coaches Association, later serving as President in 1982. He was inducted into the Iowa High School Baseball Coaches Association Hall of Fame in 1985. The Beaman Baseball Field was dedicated to Byron on May 30, 1976.
He began farming with his Dad in 1980, moving to Zearing in 1997, and lived there for 16 years before retiring to Marshalltown in 2013. Byron’s love of farming, nature, and hunting created stories and memories that will be shared by many for generations to come. Byron and Sandy were long time members of Redeemer Lutheran Church in Marshalltown. They shared their love for sports through their children’s and grandchildren’s sporting events. They enjoyed watching and analyzing college basketball and football and professional baseball. Byron knew how blessed he was by the love of family and friends, and he felt great pride for his children, grandchildren, and his first great-grandchild.

A celebration of his life will be held this summer at his beloved St. Anthony farm where all will be welcome to share stories and memories of a life well lived. Coach Rhodes has been called safe at home by the Great Umpire above. Remember, as Coach said: 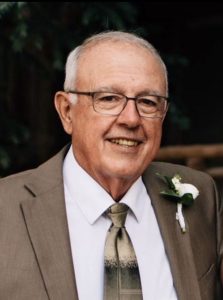