Funeral services will be held on Saturday, October 17th at 11:00 A.M. at St. Paul Lutheran in State Center with Pastor Myron Herzberg officiating.  The church requires all attendees to wear a mask and practice social distancing.  Visitation will take place on Friday, October 16th at Mitchell Family Funeral Home in Marshalltown from 5:00-7:00 P.M.  Memorials may be directed in Daryl’s name to St. Paul Lutheran Church in State Center.  For additional questions or to leave a condolence, please visit www.mitchellfh.com or call 641-844-1234.

Born Daryl Richard Stuckmyer on February 6th, 1942, at home in rural Story County, Iowa, he was the son of David Albert and Edith May (Weuve) Stuckmyer. He received his education from the Clemons Consolidated High School.

Daryl was a faithful and dedicated part of the Lennox Industry team for many years until retiring. He enjoyed car racing and spending time tinkering in his garage.  He was a big fan of the Green Bay Packers and Iowa State Football and Basketball.  Most of all, time with his son Tony and the rest of the family.  Daryl was a lifetime member of St. Paul Lutheran in State Center.

Left to cherish his memory is Anthony “Tony” Stuckmyer, his son; his twin brother Larry (Lori) Stuckmyer of Henderson, Texas; seven nieces and nephews and their families; ex-wife Kathyrn Stuckmyer and many cousins and friends. 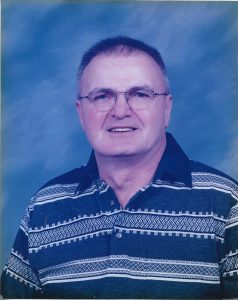