Growing up in Iowa during the depression and early part of WWII, he learned the value of hard work, perseverance through life tests, and staying true to core beliefs. These were instilled in him by his farming roots, grandparents, and a widowed mother who raised him and his four siblings in State Center, IA. Following a lifelong dream to be an MD, he graduated from The University of Iowa Medical School with service in the US Navy (1957 – 1959) and post graduate work at the Mayo Clinic in Rochester, MN. During this time he married Marlene Smith and began a 60 year marriage; during this time they had 2 children. He joined Gould Medical Group as a specialist in Nuclear Medicine and retired in 1995. He and his wife spent time between their mountain house in Lake Tahoe, CA and Indio, CA, He was known as a kind, compassionate person with keen intellect and insight. He was also known for creativity and precision through his many stained glass lamps, clocks, and windows; he was an avid golfer and singer who had performed with his brothers in barbershop quartets during their early years.

Dr. Metge was preceded in death by his parents, William and Leora Metge, and his siblings; Wayne Metge of State Center, IA and Lorrine Metge Collins of Iowa City, IA. He is survived by his children; David (Roberta) Metge of Lafayette, CO and Lisa Metge of Riverside, RI, his grandchildren; R. Wyler Metge of Novosibirsk, Russia, Emmra Metge of Haifa, Israel, Kieran and Liam Egan both of Riverside, RI, as well as by his siblings; Robert (Patricia) Metge of Des Moines, IA, and Larry (Beverly) Metge of Milford, IA.

Franklin & Downs is honored to be serving the Metge Family. A Graveside service will be held on Thursday, October 1, 2020 beginning at 3:00pm at Lakewood Memorial Park, 900 Santa Fe Ave, Hughson, CA. 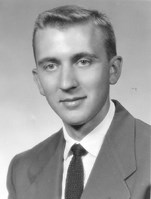