Funeral services for Stan will be held on Wednesday, September 23 at 3:00 P.M. at Mitchell Family Funeral Home with Pastor Kerry Jech officiating. A visitation will take place Tuesday, September 22 from 5:00 – 7:00 P.M. at Mitchell Family Funeral Home. Memorials may be directed to the family for later designation.  For additional questions or to leave a condolence, please visit www.mitchellfh.com or call 641-844-1234.

Stanley Keith Kielman was born February 9, 1942 to parents Henry “Heinie” and Minnie (Fick) Kielman at a farmhouse in Greene, IA.  He spent most of his childhood in Plainfield and then moved to New Sharon, where he graduated from North Mahaska High School in 1960.

Stan married his high school sweetheart, Sandy Nash, on June 10, 1962 at Union Mills Christian Church in rural New Sharon.  As newlyweds, they lived in Cambridge, MN and Germany, where he was stationed while honorably serving his country in the United States Army.  After his time of service, they moved to Melbourne, IA and have called it “home” for the past 54 years.

Stan had a strong work ethic, working full-time at Emerson – Fisher Controls while owning and operating Kielman Bottle Gas.  He could fix anything and preferred to repair older, well-built items over purchasing new.  In his earlier years, Stan enjoyed fishing, camping, motorcycle rides on the “Road Toad,” and golfing – he even scored a hole in one! He raised horses and loved all of his pets.  He liked watching all sports and was an avid Iowa Hawkeye fan – unless they lost!  Despite his preference to stay at home, Stan was always willing to camp every year at the Iowa State Fair with his wife, Sandy and he traveled all over to see his grandchildren play sports. Stan always enjoyed his motorized toys – from mopeds and boats to his scooter later in life, which he would use to “walk” the dog. More recently, Stan enjoyed watching old westerns on TV and occasionally driving his Corvette, which he and Sandy took to the Marshalltown car show just last month.

In March of 2006, Stan surrendered his life to Christ and was baptized at New Hope Christian Church.  He and his family are very involved at New Hope. He was also a member of the American Legion and the Rusty Hinges swim group at the Marshalltown YMCA – where he enjoyed visiting with friends over a free cup of coffee and always letting everyone know when the water was too cold.

Stan is preceded in death by his parents, Heinie and Minnie, sister Bernita and nephew Tracy. 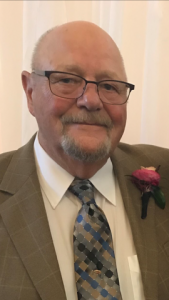