Virtus Brockman, 91 of Melbourne, IA passed away Saturday, August 29, 2020 at the Iowa River Hospice Home in Marshalltown, IA. Services will be held 10:00 a.m., Thursday, September 3, 2020, at Redeemer Lutheran Church in Marshalltown. Visitation will be 5:00 p.m. to 7:00 p.m., Wednesday, September 2, 2020, at Anderson Funeral Homes in Marshalltown. Interment will be at Maple Grove Cemetery in rural Melbourne, IA. The family requests memorials to be directed to Concordia Theological Seminary, Fort Wayne, Indiana and the West Marshall Memorial Scholarship fund. Online condolences may be sent to www.andersonfhs.com

Virtus was born August 20, 1929 to Carl and Hilda (Bruhn) Brockman in Charter Oak, IA. He graduated from Melbourne High School in 1947 and went on to graduate from AIB and then Valparaiso University where he met his future bride to be, Ruth Caroline Matter. Before he married Ruth he was drafted into the army and sent to Fort Riley, Kansas to complete basic training. He then went to Baltimore for more training and off to Seattle where the troops left by ship to Yokohama, Japan where he served with the 25th Infantry Division from 1951-1953. He endured some of the harshest conditions imaginable at Heartbreak Ridge and Pork Chop Hill each of which were major war zones.

After the war Virtus went to Gary, Indiana and worked in the steel mill, then moved on to Swift Packing plat and to the GI Farm School in Collins. Virtus and Ruth were united in marriage on November 14, 1953 at St. Johns Evangelical Lutheran Church in Sherman Center, WI. They made their home in the Melbourne and Rhodes area, and for a while in Liscomb before moving to Virtus’s home farm in 1971 where he had resided until July 2020. Virtus spent 60 years of his life farming. With his father Carl, brother Wayne, son Michael and Jon, and his grandson Sam. This was his true passion in life.

Virtus loved umpiring fast-pitch and slow-pitch softball games which he did from 1977-2013 and made many good friends along the way. He loved traveling to faraway places; Scotland, England, Venezuela, fishing in Canada and had a love for polka dancing with Ruth. He also had a passion for Casey’s donuts and Schwan’s ice cream.

One last memory of Virtus, no matter how tired, how late one works, or how late one comes home on Saturday night, God and church come first on Sunday morning. Amen and rest in peace with the Lord. 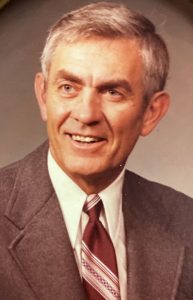