Judy E. Dicken (Foote),  of 1330 Cardinal Drive, Marion, Iowa, passed away after a short battle with cancer on Wednesday, April 1, 2020, in her home surrounded with love from her family. She was 82.

Judy was born in State Center, Iowa, on June 7, 1937, to Carl and Edith (Melberg) Foote, the third of six children. She graduated from State Center High School in 1955, where she was a center on the girls’ basketball team and played the euphonium in the band. She attended Central College in Pella, Iowa, and then furthered her education at St. Luke’s School of Nursing in Cedar Rapids, graduating as a RN in May of 1959. It was there that she met her future husband, Darrell, while he was a patient in the hospital and a Coe College student. They were married August 29, 1958, at the Methodist Church in State Center. They spent their first year of marriage in separate locations as Judy was completing her final year of training at St. Luke’s and Darrell was employed in his first teaching job in Olin, Iowa.

After receiving her degree, Judy joined Darrell in Olin and started her career as a RN at a nursing home in Wyoming, Iowa. She later went to work for Dr. Aaron Randolph in Anamosa, Iowa.

In February of 1963, Judy and Darrell moved to Marion, where she went to work at her alma mater, St. Luke’s Hospital. In 1968, she became school nurse at Linn-Mar Junior and Senior High Schools and remained there until her retirement in 1996. She was always very caring and understanding of all of the students when they entered her office and was much appreciated by many. Judy also so enjoyed her years of playing bridge in her clubs and had a close and loving relationship with its members. Judy was an avid reader and enjoyed biking and jogging with Darrell.

More than anything, Judy was so proud of her three children and their families. She was present at most of their activities, which included baseball, basketball, softball, soccer, band, vocal, trumpet and piano recitals, and horse shows. She was always there.

Judy was preceded in death by her daughter, JoEllen Dicken (mother of Brayden Prucha); her parents, father- and mother-in-law, Laurence and Elma Dicken; sisters, Joleen Bryant and Myrtie Hartman; and brother, Frank Foote.

A celebration of Judy’s life will be held at a later date. Memorials may be directed to Unity Point Hospice, 290 Blairs Ferry Road, NE, Suite 100, Cedar Rapids, Iowa, 52402. Murdoch Funeral Home & Cremation Service of Marion is assisting the family.

Please share a memory of Judy at www.murdochfuneralhome.com under obituaries. 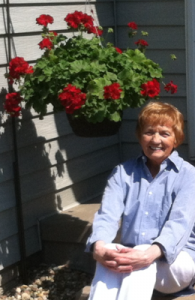