Sharon Kay Ray, 78, of Rhodes, passed away March 18th at Iowa Methodist Medical Center in Des Moines. She was born December 1,1941 at home in Iowa Falls, IA to Vernon and Virginia Flanagan Walker. She graduated high school from Rhodes and lived there nearly all her life.

Sharon married Lloyd Golly, July 7, 1964 they had one son Tracy. Lloyd passed away in a tragic car accident along with Sharon’s parents and her brother in October of 1965. In her true fierce nature she persevered to raise her sisters Diane and Kathy. She married Dick Ray, November 4, 1966, they had two daughters Ginger and Tina. She was a homemaker most of her life, providing wonderful dinners almost every night for her family. She took pride in her yard and huge garden that provided for many of her family members. For many years she enjoyed camping and boating at Lake Rathbun. She and Dick enjoyed many snowmobile trips with their close network of friends. Her true joy came years later in the form of grandchildren which she also loved in her true fierce nature. Her grandchildren quickly knew if they wanted something Grandma would provide it! Her favorite time of year was whenever her grandchildren from Alaska came for visits, that meant lots of family time. As a lifetime resident of Rhodes she developed many close friendships and was known for having a good time with all of her friends especially at the bar socializing, drinking Black Velvet and water.

Left to cherish her memory are her children Kathy (Bruce) Buck of Rhodes, Tracy Golly of Anchorage ,AK, Ginger(Charlie) Johnson of Homer, AK, and Tina (Tom) Dunham of Rhodes. And especially all of her beautiful grandchildren Carly Buck, Sam Buck (Megan Adams), Jazmyn Golly, Bristol Johnson and Jesse Dunham. Her wonderful sister and best friend Diane (Bob) Duff of Rhodes and many nieces and nephews.  She will be greatly missed by her many friends in Rhodes.

In death Sharon rejoins her husband  Dick, Lloyd Golly and her parents Vernon and Virginia, brothers Laverne and Mark.

There will be a celebration of life to be determined at a later date. 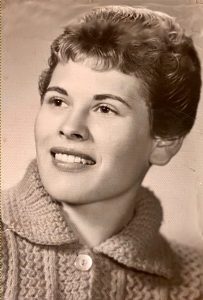