William A. (Bill) Large, 70, of State Center, Iowa passed away on March 20, 2020 in Iowa City, Iowa. He was born February 18, 1950, the only child, of Ann (Campbell) and Albert “Bill” Large. He spent his earliest years attending a two room school in Bradford, IA, and roaming the woods behind his home, experiences which greatly impacted his life.

State Center also played a major role for Bill, as friends from his childhood became his life-long “brothers” and he continued to move east on third street. From being one of the first athletes on the “Wall of Fame” to becoming the “face” of West Marshall as Middle School principal in the 90’s, school became his second home.

His love of exploring the woods translated to summers traveling with wife Kathy (Damman) and children Jacy, Jeni and Jaia. Bill loved to drive and the family never knew for sure where he was taking them and for how long! His bags were always packed! When he tired of the confines of a school room he bought a semi and “cruised” through a whole new set of experiences. His interesting career included time as a PE teacher in Nevada, teacher and principal at Baxter, working in detention centers for troubled youth and as a bouncer at Arnolds Park in Okoboji.

In retirement, Bill returned to Baxter as a substitute teacher. This flexible schedule allowed sixteen warm winters in South Texas and traveling on a whim.

Bill has left an indelible impression on his nine grandkids, who have all spent time in “Bill’s Boot Camp”, as well as his many former students who he considered “his kids”.

He will be remembered for his unique “intimidating” motivational style, beautiful blue eyes, big heart, ability to command a room (or quiet a gym), being a friend to all, “always having your back” and fighting until the end.

In death he rejoins his parents, Bill and Ann and his in-laws Eugene and Lois Damman.

Memorial contributions may be made to West Marshall Athletics. 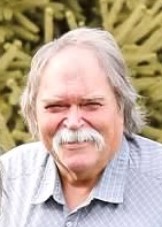