Mrs. Edith Stuckmyer, age 102, passed away on the evening of Monday, January 13th, 2020, at the Grandview Heights in Marshalltown where she has resided since April of 2015. . Stuckmyer was a longtime resident of the Minerva Valley community.

Funeral services will be held at 11:00 a.m. Saturday, January 18th, at the St. Paul Lutheran Church with Pastor Myron Herzberg officiating. Visitation will be held one-hour prior to the services. Memorials may be directed in her memory to St. Paul Lutheran Church. The Mitchell Family Funeral Home is caring for Edith and her family. Ph. 641-844-1234.

Edith May Weuve Stuckmyer was born on June 27, 1917 in Sherman Township in Story County. She was the daughter of Fred and Bertha Yingst Weuve. She received her education in rural Story County schools. She married David Stuckmyer on June 8, 1937 in State Center. They resided in Minerva all their married life. Edith helped her husband in the Blacksmith shop until he passed away May 1, 1971. She then was employed at the Iowa Veterans Home for twenty and a half years. She retired October 16, 1992. Edith was a member of St. Paul’s Lutheran Church in State Center all her life. 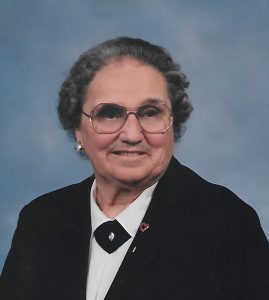