On Saturday, December 21, 2019, Muriel Armbrecht, a child of God, passed into the waiting arms of her beloved Savior. She was a resident of Windsor Manor, Nevada.

Muriel Garnet Wengert was born on July 22, 1924 to Leon and Eleanor (Thake) Wengert near State Center, Iowa. The family moved to the Colo area in 1929 and Muriel graduated from Colo High School in 1941. She attended Business College and later worked at Gambles in Marshalltown. She was a lifetime member of St. John Lutheran Church, rural State Center, where she was baptized and confirmed. Muriel married Hugo Armbrecht on August 5, 1945 at Redeemer Lutheran Church in Marshalltown.

Muriel enjoyed gardening, playing cards, reading, music and baking. She was known for her glazed doughnuts. Her children, grandchildren, and great grandchildren were a joy to her. She sang in the Story County Women’s Chorus and St. John Lutheran Church choir. Muriel volunteered many years at Clemons Lutheran Church and Lutherans for Life in Nevada. Muriel and Hugo enjoyed traveling and made two trips to Sierra Leone, West Africa to visit daughter Jean and family.

Muriel was preceded in death by her parents, brothers Gerald and Harold, and her daughter Joyce Norrington.

A memorial service will be held Saturday, December 28, 2019 at St. John Lutheran Church, 1956 Durham Avenue, State Center at 10:30 a.m. Visitation starts at 9 a.m. until service time. Memorials can be made to Lutherans for Life, Nevada, IA or to the family. 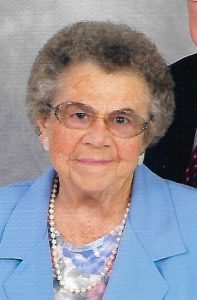