Jane Coughenour, 87 of Colo, passed away Thursday, December 19, 2019, at Story Medical in Nevada.

Visitation will be 4-7 p.m. Thursday, December 26 at Rasmusson-Ryan Funeral Home (1418 Fawcett Pkwy) in Nevada.  A funeral service will be 10:30 a.m. Friday, December 27 at the Colo United Methodist Church (602 4th Street) in Colo with the Reverend Douglas Harding officiating.  Burial will follow at the Colo Cemetery in Colo.

Jane was born April 13, 1932, in Malvern, Iowa the daughter of Glen and Bernice (Aves) Dalrymple.  She graduated from Malvern High School in 1949 and earned her teaching certificate from UNI and bachelor’s degree in education from Iowa State University.  On April 3, 1953, Jane was united in marriage to Lloyd Aden Coughenour.  She taught school at Colo, Collins and West Marshall and many years as a substitute teacher in retirement.  Jane also worked many years at the Colo Public Library.

Jane was a devoted member of the Colo United Methodist Church and was active in UMW (on the local and district level) and Church Circle.  She was a 50 plus year member of the Eastern Star and was active with Book Club, Clover Leaf Club and the WO Club.  In her spare time, Jane enjoyed reading and watching Iowa State and Iowa athletics.  Jane always made herself available to volunteer with many organizations.

Memorial contributions may be made to the Colo United Methodist Church, Colo Public Library or the Colo First Responders.

Rasmusson-Ryan Funeral Home in Nevada is handling arrangements.  Online condolences may be sent to the family at www.rasmussonfh.com 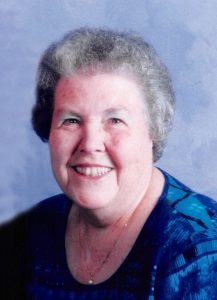