IN LOVING MEMORY OF

The family of Janet Pundt would like to express our gratitude for any and all kindness and support shown to us at this time.

REFLECTIONS ON THE LIFE OF JANET A. PUNDT

Janet Arlene Pundt “Old Lady Pundt” was born on April 16, 1934 on a farm near Owasa, IA.  She was one of two children born to Fred and Velda (Huffman) Roeske.

Janet started her education in Owasa and later went to Iowa Falls where she graduated with the Class of 1952.

On July 6, 1952 Janet was united in marriage to Dwayne Pundt at the Berlin Church near Owasa.  Janet worked with her aunt at the Advertiser in Iowa Falls while Dwayne was in the service.  After he returned from the service, she soon was the mother of a bouncing baby girl, with another daughter to follow and finally a son.  She was a mother and homemaker.  In 1965 they bought the D & J Jack and Jill Grocery Store in State Center, IA.  Dwayne and Old Lady Pundt operated the grocery for 35 years, retiring in 2000. In their retirement, they enjoyed decorating for Christmas.  Janet loved to collect anything Christmas and Coca-Cola memorabilia.  She got into refinishing furniture and woodwork.  Janet, being the life of the party, loved to dance and have fun.

Janet passed away on Tuesday, September 10, 2019 at the State Center Specialty Care after a short bout with cancer.

Janet was preceded in death by her parents,  her stepfather Del Jens, one brother Richard and one daughter Pamela Pundt. 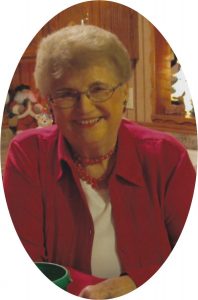