Funeral services will be held 10:30 am Saturday, May 4th, 2019, at St. Paul’s Lutheran Church, Fredericksburg, with Rev. Ronnie Koch presiding. Interment will follow the ceremony at Rose Hill Cemetery, Fredericksburg with Military Honors by the Fredericksburg AMVETS.

Friends may greet the family 3:00 – 7:00 p.m. Friday, May 3rd, 2019, at St. Paul’s Lutheran Church, Fredericksburg. Visitation continues one hour prior to the service at the church on Saturday.

Hugeback – Johnson Funeral Home in Fredericksburg is in charge of arrangements. Memorial donations may be directed to Lutheran Hour Ministry, Fredericksburg AMVETS, and Fredericksburg Lions Club.  Online condolences for Richard’s family may be left at hugebackfuneralhome.com

Richard was born May 30th, 1926, in Clemons, Iowa, the son of William and Elsie (Eggers) Armbrecht. He received his education in Clemons and was a 1943 graduate of Clemons High School. Richard worked for local farmers and his father prior to entering into the United States Army in 1951 until being honorably discharged in 1953.

On July 12th, 1953, at St. John Lutheran Church in State Center, IA, Richard was united in marriage to Margery Lorraine Wolken. To this union, five children were born. When they were first married, the couple lived in the Clemons area where Richard worked for area farmers. The couple moved to the Fredericksburg area in 1958. In 1968, Richard and Margery moved into town.

Richard worked for Supersweet Feeds in New Hampton for over 30 years. After retirement, he painted homes and barns. Richard enjoyed this job so much, it became more of a hobby than a job, and he took great pride in his work. Richard and Margery owned and operated the “Cheeseburg” in Fredericksburg for over 10 years. It was hard work but their enjoyment came from their customers becoming their dear friends.

Richard was a charter member of the Fredericksburg Lions Club, a former President of the Fredericksburg School Board, served as Chaplain for the Fredericksburg AMVETS, and was an Elder and active member of St. Paul’s Lutheran Church and loved his Lord. He had the privilege of participating in the Honor Flight to Washington D.C. in 2015 and it was a highlight trip for him. He was a avid reader and had a passion for crossword puzzles and scratch tickets. Richard’s true love was his family. Spending time during special occasions and family gatherings were the highlight of his life.

He was preceded in death by his grandson, Simon Scroggins; two brothers, Louis and Sherwood Armbrecht; one sister in infancy, Pauline Armbrecht. 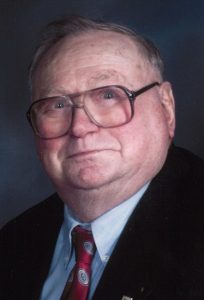