Richard “Dick” G. Witt, 87, of Clemons, Iowa, went to be with the Lord and his wife, Joan, on Wednesday, January 23, 2019 in the comfort of his own home
surrounded by his loving family.
Following Richard’s wishes there will be no public services.  The family of Dick will be holding a private celebration of life service.  Memorial
contributions may be directed in Dick’s name to his family, who will later designate them elsewhere.  For further information or to send a condolence please
visit www.mitchellfh.com or call (641) 844-1234.  Mitchell Family Funeral Home is caring for Dick and his family.
Richard George Witt was born on March 4, 1931 in Hollywood, California, the son of Mark and Mary Elizabeth “Beth” (Reese) Witt.  Dick was raised and educated
in the Los Angeles school district, graduating from South Gate High School (where he met Joan).  Following his graduation of high school, Dick went to the US
Coast Guard and later went to the University of California at Berkley, where he obtained his Bachelor’s degree in Civil Engineering. Dick joined the Masonic
Lodge in 1953 and was an active member until Joan’s passing in 2016.
On July 1, 1950 Dick was united in marriage to the love of his life, Joan Marsha Matheson. After 8 years in California and the birth of their 2 children,
Mark and Jean, Dick and Joan chose to move to Iowa to take over farming the family farm. Dick was not afraid of hard work; he dedicated his career life to
two full time jobs.  He was a civil engineer for the city of Nevada for many years, while he was also a full time farmer.  Dick had a passion for
woodworking, playing the family organ, playing cards with family and friends, reading and making sure each one of his animals were well cared for. Most
importantly, was his true love, Joan. Dick and Joan were the personification of what love means.
Left to cherish his memory are his children: Mark (Eileen) Witt and Jean (Stanley) Borton; grandchildren: Toni (Matt) Kielly, Angela (Matt) Diaz, Logan
(Jade) Witt, Amanda (Kolby) Breer, Aaron Borton and Alicia Borton; great-grandchildren: Gage, Aiva, Jax, Lettie, Coral, Barrett and Emersyn.
He is preceded in death by his bride, Joan Witt; parents: Mark and Mary Elizabeth “Beth” Witt, one infant grandson, Lucas and one infant great-granddaughter,
Amara Jean. 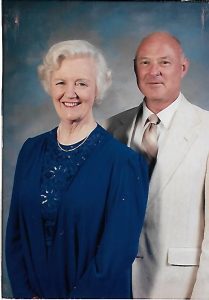