Ronald “Ron” Ernest Riemenschneider, age 81, passed away in the comfort of his own home surrounded by his family with the Chicago Cubs on WGN, on August 29, 2018.

A funeral mass will be held on Wednesday, September 5, 2018, at St. Joseph’s Catholic Church in State Center at 10:00 a.m. The public visitation will held on Tuesday, September 4, at St. Joseph’s Catholic Church from 4:00 – 7:00 p.m. with a prayer service held at 7:00 p.m. He will be laid to rest in St. Joseph’s Cemetery with full military honors by the combined American Legion and VFW Honor Guard. Memorial donations may be made to the family to be used at a later date. For condolences please visit www.Mitchellfh.com or call (641) 844-1234.

Ron entered this life on September 20, 1936, in Marshall County. The son of Earl and Ethel (Goodman) Riemenschneider, Ron grew up in the State Center area and remained there his entire life.  Ron was a lifelong member of St. Joseph’s Church and also served as a member of the parish council.  He was a graduate of State Center High School with the Class of 1954. During his time in school he was very active playing football, basketball, and baseball. Ron also played Junior Legion baseball.  After high school Ron enlisted in the United States Army and served his country honorably from March 1955 through March 1957. Upon his return from the Army he married Fonda Duffy on May 10, 1957, in St. Joseph’s Catholic Church. The two made their lives together on the family farm. Ron enjoyed tending to the fields, but would leave those fields to make it to his children’s school events and in his later years his grandchildren’s events. After retirement, Ron continued to help on the farm.  Ron was a lifelong Chicago Cubs fan, and was a Chicago Bears and an Iowa Hawkeyes football fan.  He was ecstatic when the Cubs won the 2016 World Series and loved that he shared that experience with his sons. In Ron’s free time he loved to collect airplanes and die cast tractors, most notably his Cubs collections. Ron leaves behind many family members and friends, and his humor will be missed by all.

Ron is preceded in death by his parents, Earl and Ethel, his daughter Roxanne Staats, his brother Stan Riemenschneider, his in-laws Ron and Leola Duffy, and sister-in-law Betty Sparks. 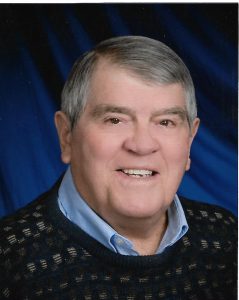