Mass of Christian Burial: Will be held on Tuesday, June 12, 2018, at 10:00 a.m. at the St. John’s Catholic Church in Greenfield with burial in the Garner Cemetery, Bridgewater, Iowa. A luncheon will be held at the church following the committal services at the cemetery. Father James Ahenkora will officiate the service.

Family Visitation: The family will greet friends on Monday evening from 6:00 p.m. to 8:00 p.m. at the Steen Funeral Home in Greenfield.

Prayer Service: Will be held on Monday evening at 5:30 p.m. at the Steen Funeral Home in Greenfield.

Memorials: Memorials may be directed to the Marilyn York memorial fund to be established by the family at a later date.

Marilyn Jane (Dvorak) York was born in Waterloo at the St. Francis Hospital on February 9th, 1941, the second child born to William (Bill) Frank Dvorak and Ludmilla Agnes (Halupnick) Dvorak. She was born 3 minutes after her twin sister, Marian Jean. She attended Country School Perry #6 from 1st grade through 8th grade and graduated from Traer High School in 1959. She was united in marriage to Charles Dean York on May 25, 1968 in Clutier, Iowa. They were blessed with two children, Michael Charles and Diane Marie. Charles and Marilyn later divorced.

Marilyn was raised southeast of Traer on the Dvorak homeplace. After high school graduation, she lived in Marshalltown for a few years, but she was most proud to call State Center, the Rose Capital of Iowa, home for 46 years. In 2014, she relocated to Bridgewater to be closer to her children and precious grandchildren. In February 2015, Marilyn was blessed to find a new home and adopted family at the Greenfield Rehab Center. Marilyn left this earth to be with her Lord and Savior on June 3, 2018 at the Greenfield Rehabilitation and Health Care Center.

Marilyn worked in the office at Fisher Controls in Marshalltown for 11 years, in the kitchen at the Marshall County Care Facility for 17 years and was able to retire in 2006 from the Veteran’s Home in Marshalltown after 8 years of service in the dietary department.

Marilyn will always be remembered for her sweet smile and joyful giggles. Marilyn never knew a stranger and absolutely adored taking care of others. She would often remind us that “I am small, but mighty.” Marilyn’s favorites include broasted chicken from Bailey’s Pizza, Fig Newtons, tuna sub sandwiches and Channel 8 programming (especially Blue Bloods and her Tom Selleck). She loved attending church and listening to the music of Father James, making crafts, having her nails and hair done and playing Bingo (her card always had to have a 7 and 13). Marilyn loved getting together with family, especially her beloved sisters and grandkids.

The family members who remain to cherish Marilyn’s memory include her son, Michael York of Bellevue, Nebraska; her daughter Diane (Ray) McCall of Fontanelle, Iowa, her sister Marian (Jim) Gauch of Marshalltown, Iowa, her sister Jo (Doug) Louderback of Chatham, Illinois; her treasured grandchildren, Evan and Easton York, Riley and Megan McCall; her aunt Bea Hushak and other relatives and friends. 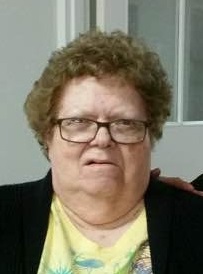