The family of Dick Ray will be hosting a celebration of life at Lincoln Valley Golf Course, April 7th, at 2 pm.

Richard “Dick” Dwight Ray, born April 22, 1939, to George and Elinor Ray, passed away peacefully, March 4th 2018.  Dick grew up in Boone, IA , and was in the 1957 Toreador graduating class.  He went on to serve two years in the United States Marine Corps.  He married into a new family when he married his wife of 51 years, Sharon (Walker) Golly in November 1966.  He spent 25 years at Swifts in Marshalltown, operated the End Zone Bar in Rhodes, with Sharon, and was self-employed with Ray and Pfantz Bldg, until he eventually retired.

Dick loved to hunt pheasants with English Springer Spaniels, but only liver and white ones, many of which were named “Boy”.  He spent weekends trapshooting all over the Midwest, and loved his vacation time with family and friends at Lake Rath”burn”, or “the lake”.

He loved to shoot pool and compete with his friends in pool league. He was the master of “table talk”.  He also loved dancing, and leading the girls, (KICK THAT LEG!)

Dick often spoke fondly of several memorable trips he made to Alaska to visit his kids.  He loved his Iowa Hawkeyes….and anyone who played Iowa State.  He enjoyed following all his kids’ sports. Softball was his favorite, though. He played fast-pitch for many years and was his kids’ coach, and biggest fan.

Dick didn’t pass up too many neon signs, either, which led him to know nearly everyone and where they were from.  He had a story to go with each location.  He was one of the best conversationalists despite being notorious for mispronouncing things.

He will be remembered for having an infectious good time, whatever the occasion, and he was usually the life of the party.  He had favorite local establishments and favorite people at those places, (you know who you are).  He was politically incorrect, too, his nicknames for you usually made fun of where you were from or how you looked.  He was quick to make fun of himself, as well, from his Boone education, his little “stub” finger, his crooked arm, and identifying himself as “Harvey Wallbanger, from Plywood, Minnesota.”

He was both the town crier and the town cry-er.  He wore his emotions on his sleeve and anything slightly sentimental caused him to quickly well up with tears.

What he loved most, though, was simply watching his kids and grandkids, and hearing about their activities, no matter where they were or what they were doing.

We will miss you, Husband, Dad, Grandpa, Brother, Uncle, and Friend!

The family would like to extend a heartfelt thank you to the wonderful caring staff at State Center Specialty Care, as you’ve become part of our family the last two years, he loved his girls.  We are also very grateful for the team from Iowa River Hospice.  Thank you all. 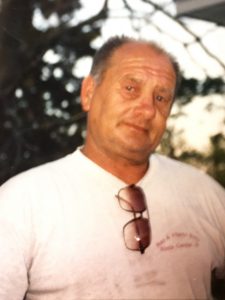