Betty Armbrecht, 92, died from kidney failure on the morning of Tuesday, February 27th, in the comfort of her home in Marshalltown.

Services will be held at 10:00 a.m. Friday, March 2nd, at the St. John Lutheran Church north of State Center with Pastor David Klinge.  Burial will be in the St. John Cemetery. Visitation will be held from 4-6:00 p.m. on Thursday at the Mitchell Family Funeral Home in Marshalltown.  Memorials may be directed to the family to be designated at a later date. For condolences, please visit www.mitchellfh.com. Ph. 641-844-1234.

Born June 19, 1925 at Hartford, Missouri, she was the daughter of Earl and Mattie Walker Abbott.  She was raised and educated in Unionville, Missouri until moving with her family to Marshalltown, Iowa in 1942.  She graduated from Marshalltown High School with the class of 1943.  During World War II, she was employed as a shipping clerk at Kiowa Corporation.

On August 3, 1946, she married August Armbrecht in Olathe, Kansas.  They farmed in the rural Clemons area until retiring and moving to Marshalltown in 1984.  She worked at Fantles in Marshalltown for 20 years until the store’s closing. In 1986 she established Betty’s Prosthesis Center in her home until closing the business in 2006.   For her many years of work with breast cancer patients, she was honored by the American Cancer Society.

Betty was a meticulous seamstress and housekeeper, enjoyed cooking and baking, and took pleasure in working in her garden and flower beds.   Her greatest enjoyment in life however was working side by side with her husband on their farm.  Work was never work to her; it was her focus and she lived for it. Even until the time of her death, she set daily goals and was productive until she accomplished them.

Baptized in the Baptist Church at an early age she was later confirmed into the Lutheran Church, Missouri Synod in 1946 and has been a member ever since.  As a member of St. John’s Lutheran Church at State Center, she has held many offices with the Ladies Aid and also taught Sunday school.  She was a past member of the MMSC Hospital Auxiliary Board and did volunteer work at numerous organizations including the Salvation Army, The Emergency Food Bank, Lutherans for Life, and the House of Compassion.

She is survived by her son, William of Clemons, and daughter, Patricia Cavanah of Estes Park, Colorado.

Preceding her in death are her husband in 1997, infant son Jeffrey Scott at birth in 1968, her parents, one brother, Edsel and two sisters, Maxine, and Ople.

The family would like to acknowledge the exceptional care given to their mother by Dr. Jacob Alexander and the staff at Iowa River Hospice. 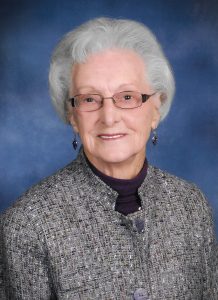