Lawrence Junior Pfantz, age 94, of State Center, died Sunday evening, February 18th, at the State Center Specialty Care in State Center where he has resided since March of 2016.

Funeral services will be held at 2:00 p.m. Wednesday, February 28th, at the Trinity Lutheran Church in State Center with Pastor Mike Maddick officiating. He will be laid to rest with full military honors by the combined VFW/American Legion Honor Guard. Visitation will be held from 5:00 p.m. to 7:00 p.m. on Tuesday at the Mitchell Family Funeral Home West Marshall Chapel in State Center. A memorial fund is being established to benefit the Orphan Grain Train in Clemons and those in the process of adoption. For condolences, please visit www.mitchellfh.com. Ph. 641-483-2900.

Born on August 1st, 1923, at State Center, he was the son of Lawrence Fred “Ted” and Marietta (Teeters) Pfantz. He received his education in the area of his birth.

Junior served our country honorably during WWII in the United States Army Surgical Corps from January of 1943 until October of 1945. He began his military career sailing to Europe on the Queen Mary which was transformed into a hospital ship. He was stationed in France, England and Germany until coming home on a captured German tanker ship.

On Thanksgiving Day of 1945, he was united in marriage to the love of his life, Arlou Faye Logan, at the parsonage of St. Paul Lutheran Church in State Center. They made their home at Marshalltown until 1964 when they moved to their farm near State Center. He also worked at Lennox Industries for 35 years until retiring at age 62. Junior was a member of the State Center United Methodist Church and the American Legion.

It was a good day when Junior could fish, garden or be around horses. It was a great day if his great-grandson Gabe was a part of it!

Left to cherish his memory are his son Larry (Lynne) Pfantz of State Center, grandchildren- Greg of Eldora, Rachel (Zach) Laws of Marshalltown and Mark (Hannah) of Melbourne, great-grandson Gabe, sister Ruth Davis of Walla Walla, WA, and many other family and friends. 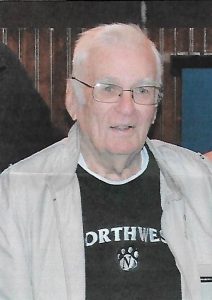