Verne was born on September 3, 1922 in State Center, Iowa to Walter and Luella (Hennies) Pfantz. Verne attended St John’s Lutheran parochial school thru the 8th grade.  He was a graduate of State Center High School with the class of 1939.   Verne proudly served his country by enlisting in the United States Army Air Corp in October 1942. He received his pilot’s training in a P-47 Thunderbolt fighter plane in Texas. He went overseas in September 1944.  He flew 80 missions giving close ground support to Patton’s 3rd Army as it moved across France and Germany.  After the War he served as a flight instructor in Texas until he was honorably discharged from the service in October 1946.  Prior to going overseas,  he married Helen Riemenschneider on July 30, 1944 in Wilmington, North Carolina. The two would make their way back to Iowa and settled near State Center on the family farm. Verne was a very active member in his community.  He was a lifetime member of the Harlan G. Pfantz American Legion Post #122, and was proud to help with military honors for veteran’s funeral services. He was also an active member of the State Center Lions Club for 60 years.  He also served on the Rose Festival Committee and was chairman for several years. 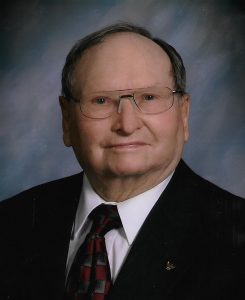