Lola Johnson, 85, Of LaMoille, Iowa passed away on September 28, 2017, at Southridge Nursing and Rehab Center in Marshalltown, Iowa.

Funeral Services will be held at 10:00 a.m. on Monday, October 2, 2017, at the Mitchell Family Funeral Home in Marshalltown, Iowa. Visitation will be held from 4:00 to 6:00 p.m. on Sunday, October 1, 2017 at the funeral home. Memorials may be directed to LaMoille Congregational Church. For condolences or questions please visit: www.mitchellfh.com or phone 641-844-1234. Mitchell Family Funeral Home is caring for Lola and her family.

Lola Mae Bryngelson was born on February 9, 1932 at home in rural LeGrand, Iowa; she was the daughter of Arthur and Cora (Botton) Bryngelson. Lola attended school in the Green Mountain school district graduating with the class of 1950. On July 26, 1950 Lola was united in marriage to the love of her life, Herbert William Johnson, at her parents’ home in rural Marshalltown. They had lived in the LaMoille area their entire married life. Lola was an Avon Representative for 40 plus years, an active member of the LaMoille Congregational Church and was a 50 year member of the Albion and Marshalltown OES, but her most important job was being a wife, mother, grandmother and great-grandmother. Herb and Lola loved to dance and she was a member of the Women of the Moose. She always looked forward to her Christmas baking of Kringla and Lefsa and hosting Christmas Eve at their home for the whole family. In recent years she enjoyed her friends and activities at Glenwood Place.

Left to cherish her memory are her three daughters: Nancy (Bob) Edler of Altoona, Judy (Tab) Hill of Marshalltown and Teri (Larry) Schoborg of Union; ten grandchildren and their families: Angela (Brian) Johnson and Tricia, Jordan, Amber, and Conner, all of Altoona; Jeff (Dani) Edler and Ellery, Elijah, and Everet, all of Altoona; Brian (Kirstin) Hill and Healey and Cela, all of Granger; Joel (Darci) Hill and Katie, Kevin, Kara and Kimberly, all of Union; Kyle (Nelly) Hill and Eva, Loey and Violet all, of  Marion, Iowa; Tiffany (Wade) Weaver and Jack, Sam and Kaitlyn, all of Pella; Brandon (Lisa) Schoborg and Olivia, Ellie and Aubrey, all of Hudson; Charles Thomas of Des Moines; Trevor Thomas of Cedar Rapids and William Thomas of Cedar Rapids, Iowa; and her son-in-law Ron Cook of Marshalltown; sister, Kaye Bovee of Marshalltown and many nieces, nephews and friends. 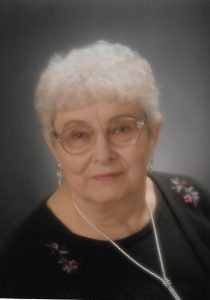