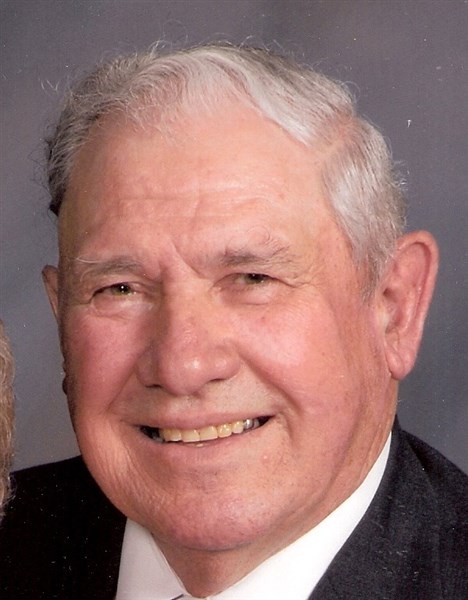 Howard H.Hilleman, 86, lifetime State Center farmer and friend, departed this earthly life on the morning of Monday, October 3rd, at the State Center Nursing and Rehab Center and in care of the Iowa River Hospice.  His death came peacefully with family at his side.

Funeral services will be held at 10:30 a.m. Thursday, October 6th, at St. Paul Lutheran Church in State Center with Pastor Joan Swander officiating. He will be laid to rest in the Hillside Cemetery with full military honors presented by the Veterans of Foreign Wars Post  #839 and by American Legion Posts #46 in the Marshalltown area (including State Center). Visitation will be held at the church on Wednesday evening from 5-7:00 p.m. Memorials may be directed to the church, Iowa River Hospice, State Center First Responders or Hope Lodge in Iowa City. For condolences, please visit www.mitchellfh.com.

The Mitchell Family Funeral Home West Marshall Chapel is caring for Howard and his family ph.

Born Howard Harold Hilleman on July 25th, 1930, at home north of State Center, he was one of eight children born to Harold and Marguerite  (Pfantz) Hilleman. He received his education in the area of his birth and graduated from the State Center High School in 1949. During the Korean Conflict, he served our country honorably in the United States Army being stationed in Leipheim, Germany. During this time, he made lifetime friends.

On July 1st, 1956, he was united in marriage to the love of his life, JeNell Thompson at the Evangelical Lutheran Church in Eagle Grove, Iowa. They made their home on the Hilleman Family Farm- in the home where he was born  Howard loved farming and being a good servant of the land.  He also treasured the community and served in many capacities including being a lifetime member of St. Paul Lutheran, 4-H, the church council and building committee, helping out others whenever he could and was dedicated to honoring those who went on before by being caretaker of Hillside Cemetery for over 20 years. Howard also worked for State Center Feed and Grain and truly enjoyed helping the neighbors farm during his retirement.

A lesson from watching the life of Howard Hilleman would be a love of  family and an appreciation of hard work and values. He will be greatly missed.