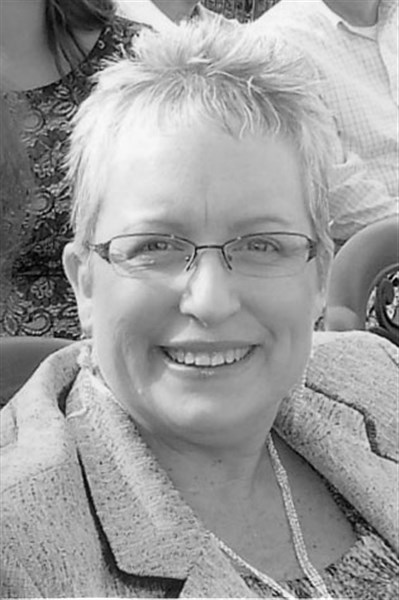 Becky Gray Butler, 58, lost her battle with cancer on July 17, 2016 in Phoenix, Arizona surrounded by her family.

Becky requested no funeral   only a time to share memories. Family and friends can gather with Becky’s family on Wednesday, August 10 from 6- 8 p.m. at the Rhodes United Methodist Church.

Becky graduated from West Marshall High School in 1975. She attended St.Luke’s School of Nursing in Cedar Rapids, Iowa. Her nursing career took her to many places- Ames, Des Moines, Colorado, Alaska, Delaware, California and spending the last 27 years in Phoenix, Arizona. She was employed at Banner Boswell Medical Center in Sun City, Arizona. Becky was a member of the Rhodes United Methodist Church.

Becky loved to travel and loved the Iowa Hawkeyes. She attended many Arizona Diamondback and NCAA football bowl games while living in Arizona. She also had a passion for dogs and cats.

Becky is survived by her two daughters, Savannah and Sierra both of Phoenix, Arizona, her parents Jack and Mary Ellen Gray of Rhodes, Iowa, one sister, Bonnie(John) Peek of Waukee, Iowa, four brothers, Gary( Sheila) Gray of Eugene, Oregon, Stan (Deb) Gray of Murray, Iowa, Jim (Kristen) Gray of Ankeny, Iowa and Rob ( Lorie) Gray of Marshalltown, Iowa, many nieces and nephews and her nursing family.

She was preceded in death by her grandparents, Lyall and Bernice Gray and Henry and Mary Townsend.

Memorials may be directed to the family. A private family burial wilt be held at a later date.