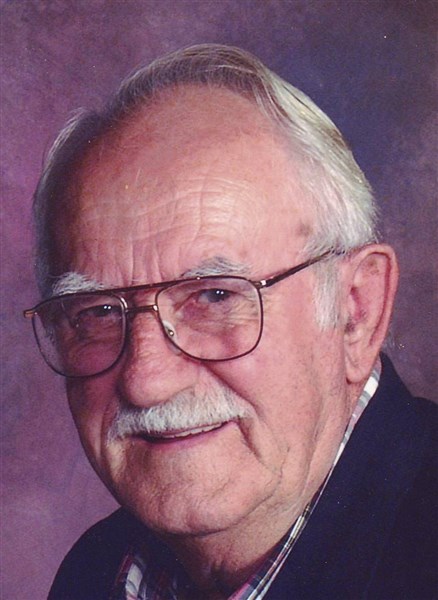 Donald Dean Nichols, 86, of Marshalltown, Iowa passed away on Thursday, June 23, 2016 at the Iowa River Hospice home in Marshalltown surrounded by his loving family.

Funeral services will be held at 2:00 p.m. on Tuesday, June 28, 2016, at the Mitchell Family Funeral Home in Marshalltown. Visitation will be held from 5:00 to 7:00 p.m. on Monday, June 27, 2016, at the funeral home in Marshalltown, Iowa. Memorials may be directed to United Methodist Church, 125 2nd Street SE in State Center or Iowa River Hospice. For condolences or questions please visit: www.mitchellfh.com. Mitchell Family Funeral Home is caring for Don and his family. Phone 641-844-1234.

Don was born on April 5, 1930, at home in Bangor Township in Marshall County; He was the son of Cady LaVern and Fannie Gail (Myers) Nichols. Don grew up in the Nichols family brick home located one mile northeast of Minerva. He attended Marietta School #1 through 6th grade and then Clemons Consolidated School where he graduated in 1947.

On October 7, 1950 Don was united in marriage to Barbara Jo Norman, daughter of Clarence C and Frances Elizabeth (Green) Norman at First Friends Church in Marshalltown, Iowa. To this union three daughters were born. They later divorced.

On May 25, 1985, he was united in marriage to Connie Irene (Guffey) Mast, daughter of James Connie and Edna Mae (Pentico) Guffey at LeGrand Friends Church. They lived in State Center and Marshalltown and in February 2006 moved to Embers. Don was a business owner and owned Don’s Standard Service in Clemons; Don’s DX Service in State Center and then worked for the Department of Agriculture and Land Stewardship (Weights and Measures) from 1980 until his retirement in 1992. Don was a 51 year member of the First United Methodist Church in State Center, 38 year member of Terrestrial Masonic Lodge No. 276 A.F. and A.M. where he served as Worshipful Master, Senior Warden and Treasurer and 23 year member of Order of the Eastern Star, Cleo Chapter No. 303. His passion was working on cars and watching car races. A highlight of his life was participating one year in the Indy 500 fire pit crew with Gary Boorom.