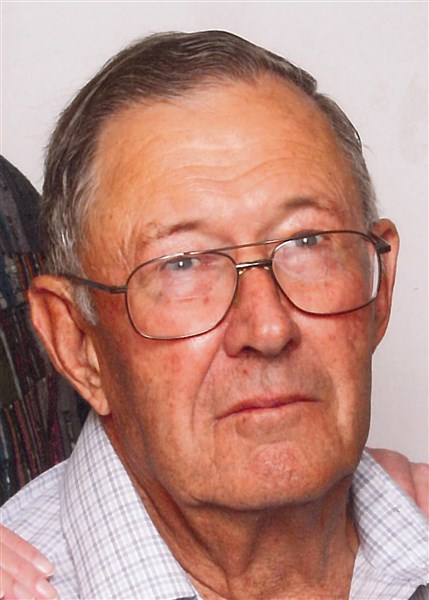 James Earl “Jamie” Freland, 82, of State Center, Iowa, passed away, Monday, April 18, 2016, at the Iowa River Hospice Home in Marshalltown, surrounded by his loving family. Memorial visitation will be held from 3:00 p.m. until 5:00 p.m., on Saturday, April 30, 2016 at Anderson Funeral Home, 405 W. Main St., Marshalltown. In lieu of flowers, a memorial fund has been established. Anderson Funeral Home, 405 W. Main St., Marshalltown, has been entrusted with arrangements. Online condolences may be sent to www.andersonfhs.com

Jamie was born on April 25, 1933, to Stephen and Lillian (Patterson) Freland. He lived his entire childhood on the family farm west of Rhodes and graduated from Rhodes High School in 1950.

On July 11, 1954, James was united in marriage to Susan Stewart, of Marshalltown. They moved to their small farm, one mile from his parents’, and have lived there ever since. Along with farming and milking Jersey cows, Jamie worked as a railroad trackman for fifty years, retiring in 2000. He later hauled milk, until he was diagnosed with pancreatic cancer in April of 2014.

Jamie loved hard work and liked to coon hunt, since his childhood. He was very fond of bluegrass and old time country music. Jamie loved spending time with his family, especially anything involving his grandchildren.

Jamie is survived by his wife, Susan; a son, Richard Freland, of Des Moines, Iowa; a daughter, Jenny Thorn, of West Des Moines, Iowa; and three grandchildren – Cody Freland, Rachel Freland, and Regan Freland, all of Prairie City, Iowa. He is also survived by two sisters, Elaine Crouse, of Marshalltown, Iowa, and Martha Yantis, of State Center, Iowa, several sisters-in-law and his nieces and nephews. Jamie was preceded in death by his parents, Stephen and Lillian