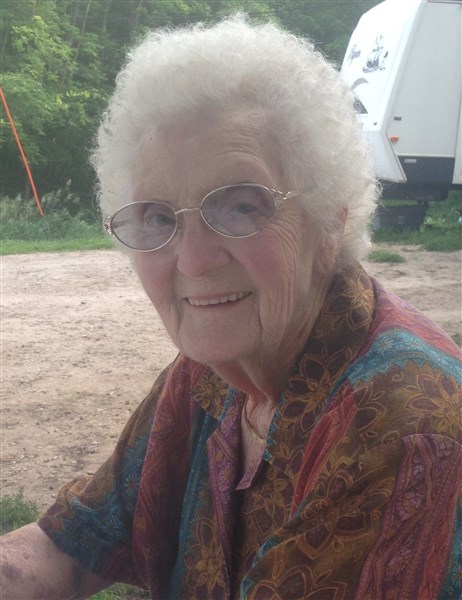 Nelma Jean (Stevens) Pugh, 95, of Melbourne, IA, passed away peacefully, surrounded by her loved ones on Friday, January 15, 2016, at the Iowa River Hospice House in Marshalltown.  Memorial services will be 11:00 a.m., Saturday, January 23, 2016, at the New Horizon United Methodist Church in Melbourne, IA.  Private family burial will take place at a later date.  Anderson Funeral Home, 405 W. Main St., Marshalltown, has been entrusted with arrangements.  Online condolences may be sent to www.andersonfhs.com

Nelma was born August 6, 1920, she was the only child of Mary (Johnson) and Lloyd “Pete” Stevens. She attended and graduated Boston School No. 5, and attended their reunions every year. Nelma turned down a full basketball scholarship to a beauty school to marry and start her family.

Nelma married Sanford “Thurman” Pugh on September 23, 1938 in Lacaster, MO. They returned to the homes in Exline and in December of that year moved to a house in Centerville. From there they moved to Moline, Il, where Nelma held a job at Montgomery Ward, then Feltex Factory making shell cases for military weapons.

They returned to Exline in 1943 to farm and remained there until 1959 when they were flooded out by the Chariton River two years in a row. They moved East of Melbourne to start over. There they remain and retired from farming, moving into town in 1976.

Besides working the farm alongside her husband and two sons, Nelma held jobs at Spurgeon’s, Kinney’s Shoes, sold Avon and J.C. Penney where she retired from in 1979. They began snow-birding to Texas and continued to do so for 25 years.

Nelma enjoyed music, traveling, dancing, square dancing, board games, playing cards, camping and following the activities of her grandchildren and great-grandchildren. She was a member of the Flutterwheel Camping Club, the Red Hat Society, Melbourne’s 50+ Club, and the Melbourne Library Book Club. This past August, Nelma had the honor of being the Co-Grand Marshall of the Melbourne Mouse Hole Day’s Parade.