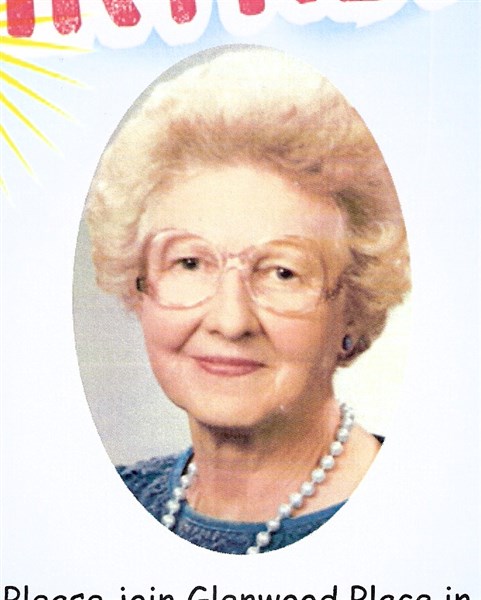 Gladys Conrad, 96, of Glenwood Place in Marshalltown, Iowa passed away on Thursday, September 17, 2015 at home.

Funeral services will be held at1:30 p.m. on Monday, September 21, 2015, at the Mitchell Family Funeral Home in Marshalltown, Iowa. Visitation will be held from 3:00 until 5:00 p.m. on Sunday, September 20, 2015, at the funeral home. Memorials may be directed to the family to be designated at a later date. For condolences or questions please visit; www.mitchellfh.com . Mitchell Family Funeral Home is caring for Gladys and her family. Phone 641-844-1234.

Gladys Mae Probst was born on June 26, 1919, at home on the farm near Colo, Iowa; she was the daughter of William and Ida (Eckhart) Probst. She attended school in the State Center Community School District. On November 9, 1936, Gladys was united in marriage to Howard Conrad at the parsonage at St Paul Lutheran Church in State Center, Iowa. Gladys and Howard lived on the farm for 58 years before retiring to Marshalltown in 1994. Gladys was a 50 year member of the Albion Methodist Church, but had been baptized in the St Paul Lutheran Church in State Center as a child. She loved to sew, quilt, cook, she raised a big garden, loved her flower gardens, she enjoyed cards, her Red Hat Group, and volunteered at MMSC, and Anson School.

Left to cherish her memory are her children;  Judean (John) Mendenhall of Nampa, Idaho, and Larry (Rita) Conrad of Alameda, California,  9 grandchildren, 16 great-grandchildren and 6 great-great grandchildren and sister, Shirley(Richard) Southard of Marshalltown, Iowa.

In death Gladys rejoins her parents, William and Ida, husband, Howard in 1995, sister, Marcella Riese, son Daryl and brother at the age of 8, Richard Probst.