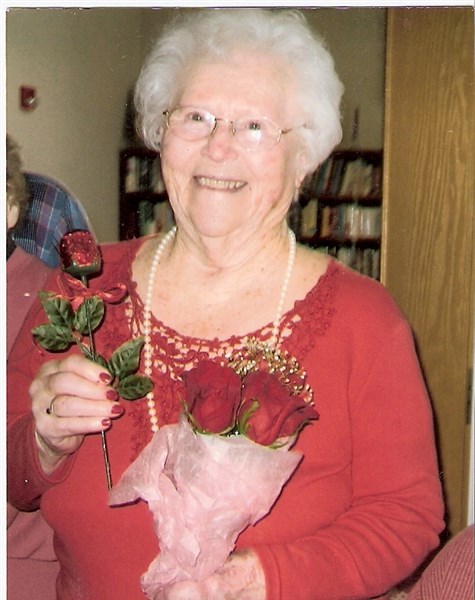 Inez Henze Badger, 99 of Glenwood Place Assisted Living in Marshalltown, Iowa formerly of State Center, passed away on Sunday, May 24, 2015, surrounded by her loving family and under the care of Iowa River Hospice.

Funeral services will be held at 11:00 a.m. on Thursday, May 28, 2015, at Redeemer Lutheran Church, 1600 South Center Street, in Marshalltown, Iowa.  Visitation will be from 9:30 until service time at 11:00 a.m. Memorials may be directed to her family.  For condolences or questions please visit: www.mitchellfh.com. Mitchell Family Funeral Home is caring for Inez and her family. Phone 641-844-1234.

Inez Leona Fricke was born on July 17, 1915, in Marietta Township at the family home in Marshall County; she was the daughter of Fred E. and Elizabeth M. (Wolken) Fricke. Inez attended St John Lutheran Church School and completed the 8th grade, in 1987 Inez attended MCC and graduated with her GED at the age of 71 years young. On June 30, 1939, Inez was united in marriage to Bill Henze in Marshalltown, Iowa, they had resided in Rhodes, New Providence and State Center, and Bill passed away in August of 1961. Inez married Cleve Badger in June of 1971, at St John Lutheran Church in State Center, they resided in State Center. Cleve passed away passed away in January of 2000. Inez lived in State Center until moving to Glenwood Place Assisted Living in 2007. Inez was a farm wife for many years, worked as a nurse’s aide at Bryant Nursing Home, baker and cook for West Marshall Schools, Home Health Aide for Community Nursing and waitress work. She was a member of St John Lutheran Church for many years in State Center, and the Redeemer Lutheran Church in Marshalltown, she had been a Sunday and Bible School teacher for many years at St John Lutheran, member of the Alter Guild, Ladies Aid and a member of the Federated Garden Club of Iowa, she loved tending her many flowers and had a big garden, she said  “ It was healing to her to feel the warmth of the earth “, played the piano in her home and will be remembered for her pie and bread making. Inez considered her family the most important especially the grandchildren.