Dorothy Perisho, 90, of Zearing, Iowa passed away on Wednesday, August 18, 2021 at the Zearing Healthcare Center in Zearing. A visitation will be held on Friday, August 20, 2021 at Fredregill Funeral Home, in Zearing, from 5:00 – 7:00 p.m. Her funeral service will be on Saturday, August 21, 2021 at 10:00 a.m. at the Zearing Christian Church. Burial will follow at the Lincoln Township Cemetery in Zearing, Iowa.
Dorothy was born on January 4, 1931 to Claude and Mable (Kline) Ladd in Iowa Falls. She attended country school in Crystal Lake until 8th grade. Dorothy then attended Forest City High School and graduated with the class of 1949. Following school, she moved to Nevada, Iowa and stayed with extended family. While there she was introduced to Lloyd Perisho. Dorothy and Lloyd were united in marriage on August 24, 1952 at the Little Brown Church in Nashua, Iowa. The couple relocated to the family farm north of Zearing where they began their family together. Dorothy took care of the kids and assisted on the farm. Once the kids had all began school she started working at Tri County State Bank and remained as the Assistant Cashier for 22 year. She then went to work at the National Veterinary Services Lab, where she remained for 10 years until her retirement. She was a member of the Zearing Christian Church and the Zearing Civic Improvement Club. Dorothy’s family was her life and she loved spending time with them and attending her grandkids sporting events. She also enjoyed reading, gardening, flowers, sewing, and quilting.
Those left to cherish her loving memories are her children Scott (Peggy) Perisho, Penney (Rick) Reed, Kathy Cook, Doug (Sandy) Perisho, and Robin (Mark) Johnson; grandchildren Jill (Scott) Clayton, Shelley (Josh Knipping) Farris, Crystal (Joel) Reed, Toni (Dustin) Smith, Stacie (Erick) Hill, Jennifer (Mark) Britten, Ryan Reed, Meredith Cook, Mitchell Cook, Amy (Bart) Weldon, Tami (Rich) Corcoran, Wyatt (Breann) Perisho, Dana (Jake) Norman, and Evan Johnson; 23 great-grandchildren; many nieces; and many nephews.
Dorothy was preceded in death by her parents, husband Lloyd, siblings Vivian, Evelyn, Robert, Thelma, Ronald, stepsister Glenda.
Memorial contributions may be directed to the family.
Fredregill Funeral & Cremation Care has been entrusted with the care of Dorothy and her family. 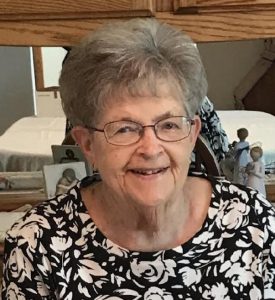