She grew up on the family farm near Melbourne and graduated from West Marshall High School in 1981. She earned her bachelor’s degree in Elementary Education from Iowa State University in 1985. Bev was united in marriage to Thomas D. Rider on June 8, 1991, in Melbourne. They made their home in Marshalltown and were blessed with two children, Barry and Jordan. She was a member of St. Henry’s Catholic Church in Marshalltown. In August of 2014, Bev and Tom moved to Ankeny. Bev enjoyed keeping in touch with friends near and far on Facebook and other social media sites.

Survivors include her husband of 30 years, Tom; two children, Barry Landt-Rider of Johnston, and Jordan Landt-Rider of Ankeny; her mother, Mary (Jim) Allen of Marshalltown; a brother, Boomer (Stephanie) Landt of Melbourne; and niece Macy Landt and fiancé Nate Casady of State Center. She was preceded in death by her father, Larry Landt.

Ames Monument & Cremation Center has been entrusted with the care of Beverly and her family. 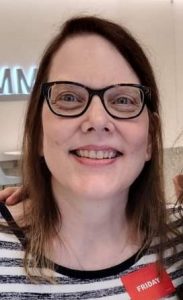