Together more than 67 years in life, Rex and Marilyn White are now together forever in eternity. Rex E. White, age 92, longtime Rhodes resident and proud U.S. Veteran, passed away early in the morning of Tuesday, May 18, 2021. His wife, Marilyn, 92, passed away only three short days later on Friday morning, May 21, 2021. Both passed at Southridge Nursing and Rehab Center.

A joint funeral service will be held at 11:00 a.m. on Tuesday, May 25 at the Mitchell Family Funeral Home with a luncheon following. Interments will be in the Eden Cemetery, Rhodes. There will be a Masonic Service for Rex starting at 9:30 a.m. and public visitation for both will be from 10:00 a.m. until service time. Memorial contributions may be directed to their family for a later designation.  For further information or to leave Rex and Marilyn’s family a condolence, please visit www.mitchellfh.com or call 641-844-1234.

Rex was born on August 12, 1928, at home in Rhodes, Iowa, the son of James and Vesta (Good) White. Not shortly thereafter, Marilyn Hegland was born on September 20, 1928, in Marshalltown, the daughter of Benart and Ada (Nelson) Hegland. Rex graduated from the Melbourne High School in 1945 and Marilyn graduated with the class of 1946 from the Marshalltown High School.

On March 21, 1951, Rex enlisted in the United States Army and served our country honorably in the Korean War. Rex was stationed in Etajima, Japan. Upon his honorable discharge on March 10, 1953, he returned to his hometown to farm with his dad and brother, Carroll. His pride of being a true American can be seen by the flag flying at the corner of Fairman Avenue and US 330 a project he faithfully tended to.

On February 28, 1954, the couple was united in marriage at the Elim Lutheran Church in Marshalltown. They made their home on the farm at Rhodes.

Together, Rex and Marilyn traveled the world visiting foreign countries and they also enjoyed hosting many foreign visitors. Being an avid mountain climber, Rex can credit climbing in four continents. A definite highlight was when he climbed the Matterhorn in Switzerland.

Left to cherish their memory are a niece, Julie (Robin) Snyder of Runnells; a nephew, William A. Jackson of Elk Grove Village, IL; a great-niece, Casey (Jeff) Kelling of Ankeny and many additional nieces, nephews, cousins and friends.

In death, Rex and Marilyn have been forever reunited. Rex has also been reunited with his parents, two sisters: Garnita Seward and Goldia Canutt and a brother, CarrollWhite. Marilyn rejoins her parents and a sister and brother-in-law, Doris A. and William D. Jackson. 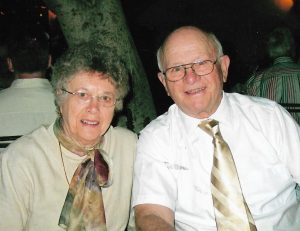