Skip to content
FacebookEmail
| logout
Patricia Julia Malloy Rood, 93, of Ames, died of congestive heart failure Sunday, January 10, 2021, at Northridge Village.
Pat was born December 31, 1927, in State Center, Iowa, to Urban “Jud” and Florence Malloy. She was the eighth of eleven children. Her mother died in childbirth when Pat was eight, so she was mostly raised by her older sisters, particularly Rita Figgins, and hired girls.
Pat attended a one-room schoolhouse for grades 1-8 and graduated from State Center High School in 1945. She attended Iowa State Teachers College (UNI) for one year and began teaching kindergarten and first grade in State Center, teaching for five years while attending summer college classes at a variety of colleges, including one in Colorado. She then taught in Ames for six years at Whittier and Beardshear schools, attended classes at Drake University, and graduated in 1957.
Pat and William “Bill” Rood met on a blind date in July 1956, and married just six months later. They raised four children in Ames: Ted, Tracy, Tamara, and Tim, also known as “The Four Ts.”
Faith, family, and friends were everything to Pat. Her hobbies included gardening, bowling, sewing, arts and crafts, and volunteering. She was known for her cooking and baking skills, especially her famous butterhorn rolls. She hosted huge family Thanksgiving celebrations each year, often with 30 or more people in attendance, without breaking a sweat. She loved a good joke, and the memory of her laughter will always bring a smile to our faces.
Pat was a devoted member of St. Cecilia Catholic Church ever since moving to Ames in 1950. She served on the parish council, school board, St. Anne Circle, and various committees. For decades she was a Monday morning money counter and served at countless wedding and funeral receptions. She was a member of Chapter LN PEO, Mary Greeley Hospital Auxiliary, PrimeTime Alive, The “Big Five,” Parkview Empty Nesters, and several card clubs.
In her later years Pat took various trips to Switzerland, Italy, and Ireland. She was half Irish and very proud of her heritage. In 2015 she moved to Northridge Village, where she made wonderful new friends and kept her apartment in such great shape that it was often used to show to prospective residents.
Pat was preceded in death by her parents, nine of her siblings, and her husband when he was 68 and she was 66.
She is survived by her four children: Ted Rood (Heidi) of O’Fallon, Missouri; Tracy Rood (Scott Bowman) of Boise, Idaho; Tamara Rood (Doyle Karr) of Des Moines; and Tim Rood (Jesus Rea), of Piedmont, California. She is also survived by eight grandchildren: Abigail Bowman, Nathan Rood, Leah Bowman, Adam Rood, William Karr, Henry Rood, Sylvie Rood, and Anna Karr. She is also survived by four great-grandchildren: Amy, Cyrus, Ethan, and Emma Rood; her sister Mary Johnston of Desert Hot Springs, California; and her many beloved nieces and nephews, especially Jill Rastrelli of Stevenson, Washington, who was Pat’s goddaughter.
Our sincere thanks to Pat’s caregivers and medical professionals, particularly Dr. Rupaul Amin and the staff at Northridge Village and Suncrest Hospice.
There will be a private burial. A celebration of life will be held when the COVID-19 vaccine is widely available and we can gather safely.
Memorials can be sent to St. Cecilia Church, 2900 Hoover Avenue, Ames, Iowa 50010, or to the U.S. Committee for Refugees and Immigrants-Des Moines, 1200 University Avenue #205, Des Moines, IA 50314, or to the charity of your choice. Stevens Memorial Chapel is handling arrangements. 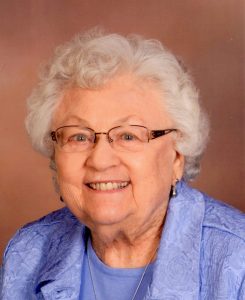