A celebration of his life along with a true party honoring his life will be held this spring, at a date and place to be announced, under the direction of his family. For condolences, please visit www.mitchellfh.com. The Mitchell Family Funeral Home is caring for Bob and his family. Ph. 641-844-1234.

Born on October 25th, 1949, in Des Moines, he was the son of Bea Phipps. Bob and his siblings were blessed when their mother married Robert Bane, who soon became their “dad.” Bob graduated from the Marshalltown High School in 1968. He was a longtime state record holder in swimming for the Bobcats. After graduation, he enlisted in the United States Navy and served our country honorably until after Viet Nam ended. He was stationed in some very challenging areas of Viet Nam including operating riverboats down the Dong Nai River. Towards the end of his enlistment, he went to school and became a Naval Nuclear Tech. He would have re-upped but it would have included three months under water in a sub, which was not in Bob’s list of favorites, so he came home to his native Iowa. Some might say he liked women and beer too much to stay under water!

One day, Bob’s dad commented that he needed a haircut, and he should go to Garry’s Barber Shop in State Center (knowing that a certain young lady was working there). He went to his haircut, left, grabbed a couple beers and went back and asked the beautiful young Stacy Butler if she would go out with him that night for a drink. Obviously, she said yes. On February 16th, 1985, the two were married in Ames, but State Center was always home. He was a member of the Harlan G. Pfantz American Legion Post #122 and a true connoisseur of Budweiser and lover of parties! Bob enjoyed riding his Harley, time with his cockatiel, Sassy, and playing his guitar and harmonica. He often referred to his harmonica as his “4th child.”

In death, Bob rejoined his mom and step-dad, sister Donna and brother Ron. 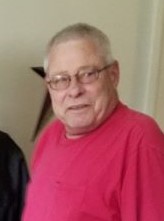