The soul of a true American and Marine, Larry G. Mercer, age 69, of Marshalltown, departed this earthly life on the morning of Monday, August 19, 2019 at the University of Iowa Hospitals and Clinics in Iowa City.

Funeral services will be held at 1:30 p.m. Friday, August 23, 2019 at the Mitchell Family Funeral Home. He will be laid to rest with full military honors by the combined American Legion and VFW Posts in the Marshalltown area in the Eden Cemetery at Rhodes. Visitation will be held from 5:00-7:00 p.m. Thursday, August 22nd at the funeral home. For condolences, please visit www.mitchellfh.com or phone 641-844-1234.

Born on October 23, 1949, in Marshalltown, he was the eldest of seven children born to Frank and Betty (Porter) Mercer. He graduated from the Marshalltown High School in 1968. Soon after, he enlisted to serve our country honorably in the United States Marine Corps during the Vietnam era, stationed in Okinawa. He served 8 ½ years, receiving his honorable discharge as Staff Sargeant.

On August 13, 1977, he was united in marriage to Deb Huffaker. The two shared 42 years together at the time of his passing. They made their home in St. Anthony, Rhodes and Marshalltown where he was last employed with Fisher Controls. He had been employed previously with Donnelly Marketing in Nevada, Ron Fisher Furniture and Tama Pack.    Mr. Mercer was a member of the American Legion in Marshalltown and Rhodes.

Larry was a proud US Marine who treasured his family (especially his great-grandson, Maverick) and enjoyed the Chicago Cubs, fishing and going to the shooting range.

Left to cherish his memory are his loving wife, Deb; daughter, Amanda Mercer (John Morton) and a daughter by his marriage to Deb, Angela (Steve) Gibbs of Melbourne and their children Abra Huffaker (Justin Dougherty) of Rhodes, Karis (Cpl. Trenton) Keislar of Camp Pendleton, CA and Stone Gibbs of Melbourne; brothers, Steve (Marg) Mercer of Ames and George (Judy) Mercer of Vidor, TX and many nieces, nephews and friends. 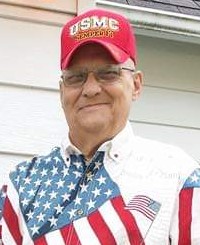