Tim grew up and attended school in Iowa Falls where he met his wife Claudia. They were united in marriage on November 22, 1971 and spent their years together raising children in California, West Virginia, Ohio, and eventually settling back home in Iowa.

Music and family were his greatest joys. He played in several bands with his brother. After attending college and broadcasting school, he worked for two decades as a morning radio announcer, including hosting his own radio show: Nichols in the Morning at KFJB in Marshalltown, and DJing weddings on the weekends. He later pursued his love of animals and spent another two decades working on various farms.

Tim’s most precious moments were spent with his wife; together they were devoted to family time with their children and 8 grandchildren. Tim also enjoyed camping, playing guitar, and roadtripping. In retirement he stayed busy delivering sandwiches for Jimmy Johns and especially enjoyed greeting everyone’s pets at the door. He touched many lives with his infectious sense of humor and sarcasm.

Family will hold a private ceremony at a later date. In lieu of flowers the family asks for donations to PANCAN.ORG (Pancreatic Cancer Research.)

Tim is preceded in death by his parents Don and Jane (Rambo) Nichols, and father-in-law Keith Pfeiffer.

“Well it’s alright, if you live the life you please.” – The Traveling Wilburys 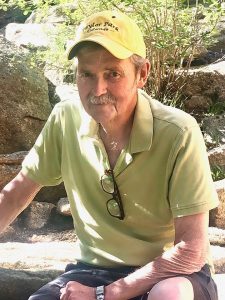