Gary “Boomer” Maxwell, 88, of Rhodes, Iowa, passed away peacefully on Wednesday, December 12, 2018 at State Center Specialty Care with his loving family by his side.

Funeral mass will be held for Gary at 10:00 a.m. on Saturday, December 22, 2018 at St. Joseph Catholic Church in State Center with Father Rick Dagit officiating.  Public visitation will be held from 4:00 – 6:00 p.m. on Friday, December 21, 2018 at Mitchell Family Funeral Home in Marshalltown.  Memorial contributions may be directed in Gary’s name to his family which will be later designated elsewhere.  For further information or to send a condolence please visit www.mitchellfh.com or call (641) 844-1234.  Mitchell Family Funeral Home is caring for Gary and his family.

Gary Maxwell was born on December 30, 1929 in Rural Story County in the family home, the son of Vernon and Nell (McWherter) Maxwell.  He graduated from Rhodes High School and following high school, Gary honorably served his country by enlisting in the United States Army.  Gary served his time during the Korean War.

On August 22, 1953, Gary was united in marriage to Patricia Dodd in Rhodes, Iowa.  From this union six children were born: Barb, Kathy, Greg, Lori, Jacki and Mick.  Gary was a very hardworking man dedicating his working career to Swifts where he was a supervisor for many years before retiring.  He also worked on the farm but to Gary he never thought of time spent on his farm as “Work”.  He and Pat raised their children to understand the value of family, friends and hard work.

Gary was a proud member of the Rhodes American Legion.  He had a passion for restoring John Deere tractors, planning and taking family vacations, farming, and most importantly was the time he spent with his family and friends.

He is preceded in death by his loving wife, Patricia; daughter Jacki; parents Vern and Nell; and two brothers Vern and Gene. 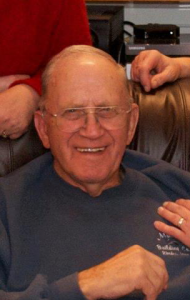