Mrs. Marilyn Hall, 88, died on Friday, October 26, at Lakeside Lutheran Home in Emmetsburg. She was born on October 30, 1929 (the day after the stock market crashed), the daughter of Foy and Alice Niederhauser Wilcox.

They have three children, Kathy Hall of Emmetsburg, Barb (Dan) Matney of Laurens, and Tom Hall of Cape Coral, FL. Four grandchildren and seven greatgrandchildren also survive. She was preceded in death by one brother, Don Wilcox of Urbandale and one sister, Joan McKibben of Marshalltown.

She grew up in Marshalltown and graduated from Marshalltown High School, then attended Iowa State Teachers College for 2 years, graduating with a teaching certificate. She later earned her B.S. from Drake University in 1969.

She taught second grade in the West Marshall School District for over 30 years, retiring in 1991. Throughout her life she received letters from former students telling her how much she had impacted their lives.

Marilyn and Willard farmed and raised their children in the Clemons area, before retiring to Marshalltown. She was a member of Elim Lutheran Church for many years. She was also a proud member of the D.A.R.

Funeral services will be held on Friday November 2, 2018 at 10:30 at the Mitchell Family Funeral Home. With a public visitation held on Thursday at the Mitchell Family Funeral Home from 6 – 8:00 p.m. Burial will follow at the Clemons Cemetery. Friends and family may visit www.mitchellfh.com or call (641)-844-1234. Memorial contributions may be made to the Elim Lutheran Church or Iowa River Hospice in Marilyn’s name. 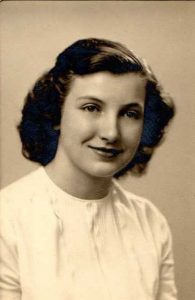