Russell “Rusty” Hibbs, 56 of Marshalltown, IA, passed away Monday, June 11, 2018, at his residence surrounded by his family. Funeral services will be 10:00 a.m., Friday, June 15, 2018, at New Hope Christian Church in Marshalltown. Visitation will be 4:00 p.m. to 7:00 p.m., Thursday, June 14, 2018, at New Hope Christian Church. Interment will be at Marietta Cemetery in rural Marshalltown. In lieu of flowers, memorials may be directed to Marshall County 4-H Foundation or the YMCA – YWCA Annual Campaign Youth Scholarship Fund.  Arrangements are entrusted to Anderson Funeral Homes. Online condolences may be sent to www.andersonfhs.com.

Rusty was born January 25, 1962, to Louie and Susie Zimmerman Hibbs in Marshalltown and grew up on a farm near Albion, IA.  He attended elementary school in Albion, Miller Middle School and Marshalltown High School, graduating in 1980.  Rusty graduated in 1982 from Hawkeye Tech in Waterloo, IA, with an associate degree in animal science.  He was very active in Marshall County 4-H, showing livestock. He was a member of the Marietta Clippers 4-H Club for 9 years.  Rusty showed hogs and cattle, including having the grand champion steer in 1977.  He was also a member of the Marshall County 4-H Youth Livestock Judging Team.  Rusty and his brother, Rod, were part of the team that won the 1979 Iowa State Fair Livestock Judging Competition, and went on to represent Iowa in the North American International Livestock Exposition in Louisville, KY.  He was also a member of the Hawkeye Tech Livestock Judging Team, participating with the team at several college competitions around the Midwest.  Following graduation in 1982, Rusty began farming with his brother, Jeff.  He was named to the Iowa Cattlemen’s Young Cattlemen’s Tour in 1994.  In 1996, Rusty began working at Minerva Valley Fertilizer Company at Bangor, IA.  When MVFC was purchased by Crop Production Services in 2002, he was named manager.  Rusty later also provided oversight to CPS in Conrad, IA.  Under his leadership, the Bangor farm center was named to the CPS President’s Club 10 consecutive years from 2005 to 2015.

On April 5, 1986, Rusty was united in marriage to Carol Anderson of Gilman, IA.  They have two children, Tanner and Taylor.  The family lived on a farm north of Bangor until moving to Conrad in 2003.  Rusty and Carol moved to Marshalltown in 2015.  Rusty was a lifelong supporter of Marshall County 4-H.  He served 11 years as an assistant 4-H leader for the Liscomb Lively Laborers.  He was also a member and board member of the Marshall County Cattlemen for several years, as well as a member and board member of the Marshall County Pork Producers and a board member of the Elmcrest Association.  Rusty had an easy-going personality combined with a strong work ethic and a quiet faith.  He valued spending time with his family and friends above all else. 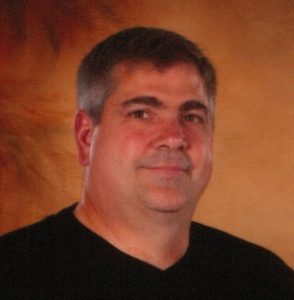