A Funeral Mass will be celebrated at 10:30 a.m. Saturday, February 17, at St. Gabriel’s Catholic Church in Zearing with Fr. Rick Dagit as celebrant. He will be laid to rest in the Sacred Heart Cemetery at St. Anthony. Visitation will be held on Friday evening from 5:00-7:00 p.m. at the church. For condolences, please visit www.mitchellfh.com. The Mitchell Family Funeral Home is caring for Bill and his family. 641-844-1234.

Born on February 25, 1931, in Marshalltown, he was the eldest of four boys born to Herman and Lena (Nirschle) Yocum. He attended the Brat Country School until 8th Grade and then graduated from the Green Mountain High School. Even though Green Mountain was school, his family lived nearest to Garwin until 1951 when they moved to rural St. Anthony. From the time Bill was able to help, he farmed right up until this past fall when he still helped Jeff on the home place. Mr. Yocum also served our country honorably in the United States Marines Corps.

Bill met a beautiful young lady- Hazel Marie Mitchell- at the Forest Park Ballroom in Marshalltown and on November 21, 1956, the two were united in marriage in Newton. They made their home in Newton for a couple of years until moving to St. Anthony, soon to be joined by three children and numerous grandchildren.

Bill weathered many storms as all farmers do, having his very first car wrecked by some kids less than a week after purchasing it; moving from the GMG area in 1951 at age 20 to the Zearing-SA area only to have their entire first crop destroyed by a hail storm in July 1951; and serving in the USMC, coming only hours from death as a young man. None was more devastating than the summer of 2015, losing his lovely wife Hazel, and then his folk’s farm, his health followed suit.

Bill was a born farmer and a devoted man of the catholic faith. He was a member of Sacred Heart in St. Anthony until their tragic fire, then moving membership to Zearing. He enjoyed family time and going out to eat (especially pizza) and homemade ice cream. He also enjoyed seeing friends, family and strangers hunting deer and pheasant and seeing them on his farm ground. It was a good day when country music was played on the radio or by his grandchildren. Now he gets to meet a favorite-Buck Owens- and enjoy his heavenly concert in the front row.

In death, he rejoined his beloved wife, Hazel who passed away in 2015; his parents, daughter, Joyce Slater and brother, David. 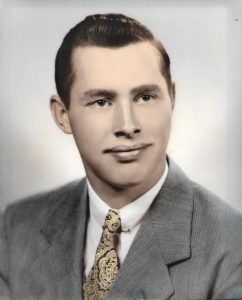