Eugene Erwin Damman was born January 10, 1924 to Dora Irene (Schorman) and Clarence Martin Damman at the home of his grandparents where his mother was recuperating from a fall on the ice resulting in a broken leg. He had a lifetime aversion to winter weather!

As an only child, he enjoyed growing up in an extended family environment south of Melbourne, where most of his neighbors were cousins, all attending Logan #9 school. He graduated with the Melbourne Class of 1941 and was the oldest surviving male member at the Alumni Banquet this past summer.

Eugene was united in marriage to Lois Virginia (Ward) Damman on Valentine’s Day 1947. They raised three children on the family farms, Kathleen Lois (1948), Steve Eugene (1951), and Edwin James (1956). Eugene gave his children a love of traveling by attaching a camper to the farm pick-up and visiting 48 states and several World’s Fairs.

Following Lois’ death in 1990 Eugene continued to live on the farm, spending many hours in his shop. Using mechanical ingenuity he developed ways to accomplish tasks by himself that would ordinarily require assistance. He took a very active role in the lives of his grandchildren, Jacy (Lynn) Large, Jenica (Zach) Thompson, Jaia (Scott) Fischer, Julie Kingland, Joel (Kelley) Damman, and Brian (Emily) Damman, attending their activities, taking them to appointments, and helping them obtain cars.

Eugene anticipated attending family gatherings with his great grandchildren, Milly Mylo and Mindyn Large, Wyatt, Wesley, Madelyn and Raylan Thompson, Lillian and Luella Fischer, Claire and Greta Kingland and Natalie Lois Damman. They will be joined by Brian and Emily’s son this spring.

Eugene spent many hours reading and was particularly interested in local history. His excellent recall and attention to detail enhanced his stories, many about motorcycles. He “never met a stranger” and enjoyed visiting with everyone.

Besides his immediate family including Son-in-law Bill Large and daughter-in-law Lori Damman, he is survived by sisters and brother-in-law Jean Hurlbut and Bill and Gwen Ward, many nieces, nephews and friends including his “family” at State Center Care Facility, where he died February 11, 2018. Services will be held on Friday February 16, 2018 at St. John United Church of Christ in Melbourne at 10:30, and a public visitation will be held on Thursday February 15, 2018 at the Mitchell Family Funeral Home staring at 5:00 p.m. with the family to great friends until 7:00 p.m. For condolences please visit www.Mitchellfh.com or call (641) 844-1234. 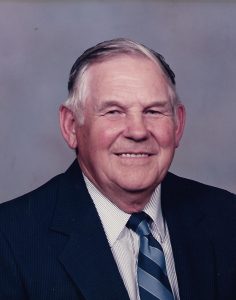