Funeral services were held at 2:00 p.m. at St Joseph’s Catholic Church in State Center, Iowa on Monday, February 12, 2018. Visitation was at 1:00 p.m. before service time at the Church. Memorials may be directed to the family to be designated at a later date. For condolences or questions please visit: www.mitchellfh.com . Mitchell Family Funeral Home is caring for Roxanne and her family. Phone 641-844-1234.

Born Roxanne Denise Riemenschneider on October 12th, 1961, in Marshalltown, she was the daughter of Ronald and Fonda (Duffy) Riemenschneider. She graduated with the West Marshall High School’s Class of 1980 and later Iowa Wesleyan University, receiving her degree in Elementary Education. On December 30th, 2016, she was united in marriage to Rick Staats in Muscatine. They made their home in Muscatine where she was a homemaker and enjoyed sewing, bike riding, NASCAR and concerts.

In death, she rejoined her grandparents Earl and Ethel Riemenschneider and Ronald and Peggy Duffy. 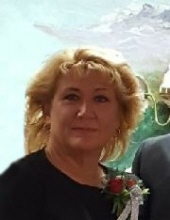