05/18/1918-01/18/2018Evelyn G. Matney (Great Gram), 99, passed away peacefully in Turlock on January 18, 2018, four months short of her 100th birthday. Evelyn was born in Vienna Township, Marshall County, Iowa to Frank and Anna Kolbe. After graduating from Marshalltown High School in 1936, she worked for Brittnells Department Store and later for The PMA Office in Marshalltown. On February 18, 1950 she married Thomas Matney and they soon moved to Southern California. Several years later they settled in Turlock. Over the years she substituted in the Turlock School District elementary school offices and was in charge of the VFW student essay contests. She was a member of the Turlock VFW Women’s Auxiliary and the American Legion. She also enjoyed attending New Life Christian Center and loved to read.

Evelyn was an amazing cook and seamstress. In 2005, she was asked to assist in the creating of the Turlock banner for the League of California Cities Conference, which still hangs in the Yosemite Room where Turlock City Council meetings are held. She received the Mayors Proclamation and was declared the “Betsy Ross of Turlock,” for which she was greatly honored.

In 2012, at age 94, she decided to take painting lessons, something she had always wanted to do. Since then she has done over 40 paintings for her family and friends, several of which were entered in the Stanislaus County Fair exhibits. Since 2013 she has earned six first place ribbons as well as several second, third, and Honorable Mentions. These paintings will be treasured always by her loved ones.

Great Gram’s family was her greatest source of joy and the loss we feel is immeasurable, but we were so blessed to have her for 99 years and 8 months. Although it would never be long enough, we must share her now with heaven.

Allen Mortuary is in charge of arrangements. Burial will be private. A celebration of life will be announced at a later date. In lieu of flowers, the family requests donations be made in her name to the Turlock Gospel Mission at 432 S. Broadway, Turlock, CA 95380. 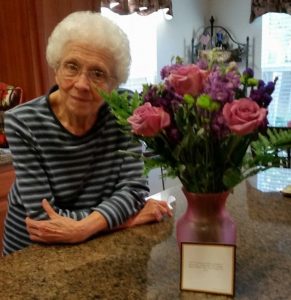