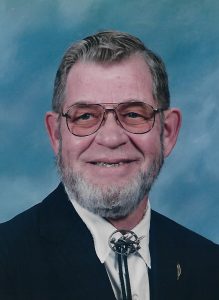 Larry Westphal, 81, of State Center, passed away on Thursday, August 31, 2017, at the Iowa River Hospice Home in Marshalltown, Iowa.

Funeral services will be held at 11:00 a.m. on Saturday, September, 2, 2017, at the St. John Lutheran Church, State Center. Iowa. Visitation will be from 10:00 a.m. until service time at 11:00 a.m. In lieu of flowers, memorials may be directed to the St. John Lutheran Church or Iowa River Hospice. Military Honors will be provided by the combined VFW/ American Legion Honor Guard. For condolences or questions please visit: www.mitchellfh.com or phone 641-844-1234. Mitchell Family Funeral Home is caring for Larry and his family.

Larry Dean Westphal was born on July 30, 1936, in State Center, Iowa; he was the son of Ferdinand and Myrtle (Gerke) Westphal. Larry attended school in the State Center School District graduating with the class of 1953.  On June 16, 1957, Larry was united to Janet Sue Schwartz at the Trinity Lutheran Church in State Center. They had lived in Colo, Garwin, Gladbrook, until moving to the farm near State Center in 1978. Larry served our country honorably in the United States Air Force, SP3 corporal in the 82nd Airborne from 1954 until 1956. After Larry retired from the farm he worked for Spread-All. He had been a member of St. John Lutheran Church and had served in many church offices, Clemons Lutheran School Board, Farm Bureau Member, and the American Legion. Larry enjoyed fishing and spending time with his family. He will be remembered as a hard worker and strong willed.