Richard Joseph Daters (Dick), 85, lifelong State Center/Melbourne resident and farmer known for his strong work ethic and eternal faith, passed away on June 16, 2017 at Iowa Methodist Medical Center with his family by his side.

Funeral services will be held on Wednesday, June 21, 2017 at St. Joseph’s Catholic Church in State Center at 10:00 a.m. A public visitation will be held on Tuesday, June 20, 2017 at St. Joseph’s Catholic Church from 5:00 p.m. until 7:00 p.m. with a vigil service starting at 7:00 p.m. He will be laid to rest with full Military Honors will be provided by the Combined VFW/American Legion Honor Guard at State Center. Memorial contributions may be made to the family to be used at a later date. For condolences please visit www.mitchellfh.com or call (641)-844-1234.

Dick Daters was born on August 22, 1931 at home near State Center, Iowa. He was one of seven children born to Charles and Rosena (Neuroth) Daters. He graduated from State Center High School with the Class of 1949. In 1953, he served his country in the United States Army and was honorably discharged as a Korean War Veteran in 1954 with the rank of Sergeant. After his return from the military, Dick began his lifelong dream of building his family farm. On a chilly 17 degree below zero day in February 1955, he was united in marriage to JoAnn Downs at St. Mary’s Catholic Church. The couple made their lives together on the farm. He treasured his family farm making sure it was spotless and not a single blade of grass went uncut. That same passion carried over into his relationship with the church as he sang in the choir for over 75 years and volunteered his meticulous grounds keeping skills. He took great pride in the St. Joseph’s Cemetery by leveling graves and reseeding if it was needed. He was an avid St. Louis Cardinals fan, and he also enjoyed Iowa State Men’s Basketball, cheering for them every chance he had after receiving the gift of satellite television. He was a family man always wanting his children and grandchildren to have more opportunities than he ever had, and he made sure that happened.

He is preceded in death by his parents, Charles and Rosena; brothers: Everill Daters and LaVerne “Fat” Daters; his daughter at birth Jane; sister-in-law Janet, and brothers-in-law Ralph Miller and Richard Dunn. 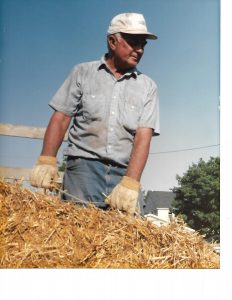