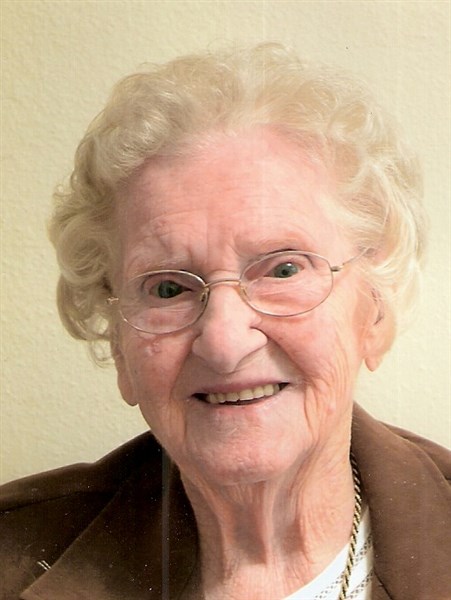 Janette Eggers, 98, of State Center, Iowa passed away on Wednesday, June 8th, 2016 at Care Initiatives in State Center. Visitation will be held on Tuesday, June 14th from 9:30-11:00 AM at Trinity Lutheran Church in State Center followed by funeral services at 11:00AM. Burial will be at Hillside Cemetery immediately after the service. Memorials may be directed to Trinity Lutheran Church in State Center. For more information or to send a condolence, please visit www.mitchellfh.com or phone 641-844-1234. Mitchell Family Funeral Home is caring for Janette and her Family.

Janette Fay Eckhart was born March 4, 1918 in Marshall County, Iowa to William and Lucretia (Riemenschneider) Eckhart. She was baptized and confirmed at St. Paul’s Lutheran Church. She attended Eckhart County School #8 and then State Center High School, graduating with the class of 1935. On December 5th, 1935 Janette was united in marriage to Raymond Eggers. They made their home on a farm north of State Center until 1983 when Raymond passed away. Janette was a member of Trinity Lutheran Church and a charter member of the Trinity Ladies Aid. In the early 1970’s Janette became a certified nurse’s aide and worked for many years at the State Center Manor.

Janette’s family was her dearest treasure. She was a caregiver to many. She enjoyed cooking, baking, gardening, quilting, with ladies from church, reading, and when her eyesight failed, listening to books on tape. She lived life fully and will be deeply missed.

She is preceded in death by her husband, Raymond, her son Jerry, granddaughter Cynthia, and three brothers Glenn, Dale, and John as well as three sisters; Doris Westphal, Lois Smith, and Helen Nolta.