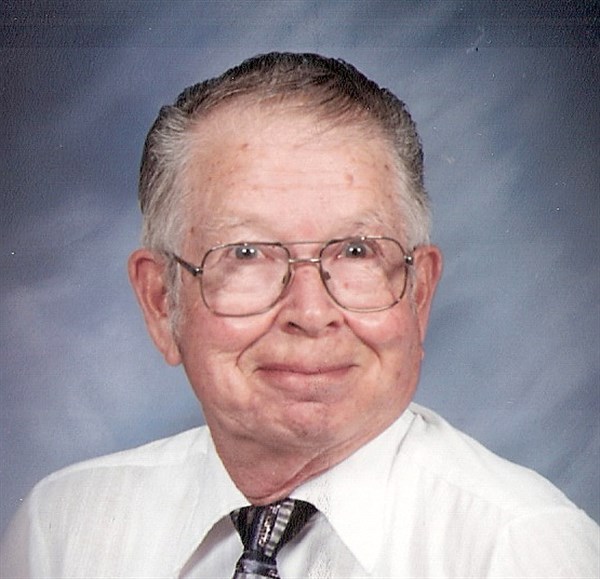 The loving and distinguished personality of lifelong State Center resident Ivan “Ike” Bodie was called to his heavenly home on the afternoon of Wednesday, March 9th at the State Center Manor with his family at his side. Ike was care for by the staff of State Center Nursing and Rehab and the Care Initiatives Hospice.

Funeral services will be held at 10:30 a.m. Monday, March 14th, at the St. Paul Lutheran Church in State Center, with Pastor Joan Swander officiating. He will be laid to rest in the Hillside Cemetery with full military honors conducted. Friends may visit at the MitchellFamily Funeral Home West Marshall Chapel in State Center from 5-7 onSunday. Memorials may be directed to St. Paul Lutheran or Care Initiatives Hospice.

Born in State Center on May 31st, 1921, he was one of eight children born to William and Nellie (Saxsauer) Bodie. He received his education in the area of his birth and graduated in a special ceremony at West Marshall a few years ago.

Ike served our country honorably as part of the greatest generation in WWII. He was awarded the Distinguished Flying Medal as well as many others. Ike was a left gunner on a B-29 over Japan in the United States Army Air Corps from August of 1942 until his honorable discharge in June 1945.

On June 3rd, 1950, he married the love of his life, Barbara Mulcahy. To their union, two sons were born- Steven and Bruce. Mr. Bodie was a dedicated and hard-working man who had a 40 year career at the Chevy dealership in State Center and later 23 years as a school bus driver for West Marshall School. Ike was a proud member of the St. Paul Lutheran Church since 1952, a 70 year member of the American Legion Post #122, a 50 year Mason and overall supporter of the State Center Community. He enjoyed hunting, fishing, the wintertime travels with Barb to Texas, mushroom hunting, playing poker, 500 and bingo, growing roses and solving the world’s problems over coffee in the morning uptown. Most of all, his family came first and he treasured them all.

Left to cherish his memory are Barb, his loving wife of over 65 years, sons- Steven of Norwalk and Bruce (Raejean) Bodie of Marshalltown; grandchildren- Tammy (Jason) Johnston and Matt (Laurie) Bodie; great-grandchildren- Jayden Bodie, Hunter Bachman and Hadley Jayce Johnston; step-grandchildren- Sarah and Jason Johnston, Jr. as well as many nieces, nephews and a host of friends.