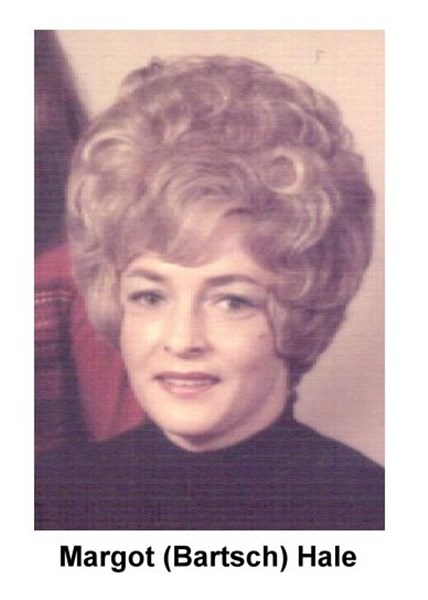 Margot Martha Irma (Bartsch) Hale fell seriously ill
while on a cruise aboard the Carnival Valor with her
daughter Michele by her side. On Thursday morning
August 13, 2015 she was taken to the clinic in
Cozumel, Mexico, where she passed away before she
could be evacuated to a larger hospital.

She met and married Gerald “Jerry” Hale who was
stationed with the U.S. Navy in Bremerhaven, Germany.
They were married in 1958 at the base Chapel.
Margot and Jerry had two daughters, Phylis Smith, who
died in 2014, and Michele Yohe.  Phylis’ son lives in
West Virginia and is the father of two beautiful
daughters, Amanda Smith and Sarah Powell.  Michele
married William Yohe III and they live in Concord,
NC.  Bill & Michele have two beautiful daughters,
Alexis and Morgan.

Margot was born in Berlin, Germany on 1 July 1937 to
Alfred and Irmgard (Drange) Bartsch.  The family
originated in Neuhaus, Kreis Frankenstein, Schlesien,
Germany (now Poland).  After the war the family moved
to Bremerhaven, Germany where Alfred established a
thriving taxi business and Irmgard became oldest
active female taxi driver in Germany.  Margot had a
brother, Werner, who predeceased her on 3 May 2007.
She has four nieces living in Bremerhaven (Bettina,
Belinda, Bianca and Jennifer) three cousins living in
Berlin (Jurgen, Ulla and Wolfgang) and a special
German friend, Evelyn Rautschka, who visited frequently.

Margot’s health had been slowly deteriorating for
several years and when asked by her cardiologist what
she had on her “bucket list” she said she wanted to
go on one more cruise.

She didn’t make it all the way through but we take
solace in knowing she died doing what she loved.

There will be a service for Margot at the Mitchell
Family Funeral Home, 1209 Iowa Ave W., Marshalltown,
Iowa 50158 at 11:00 a.m. on Saturday August 29th.
Public visitation will be held one hour prior to
services.  A reception will follow with burial at the
Eden Cemetery in Rhodes, where Jerry’s family from a
great-great grandfather to recently departed family lie.

There will be a celebration of life gathering in
Orange City, Florida in the middle of September.
Plans have not been finalized.

Jerry and Bill & Michele Yohe family thank everyone
who has expressed condolences with special thanks to
sister Jean Pfantz without whom we could never have
arranged this and to our neighbor in Deltona, Mrs.
Nancy Walker who has assisted in every way.