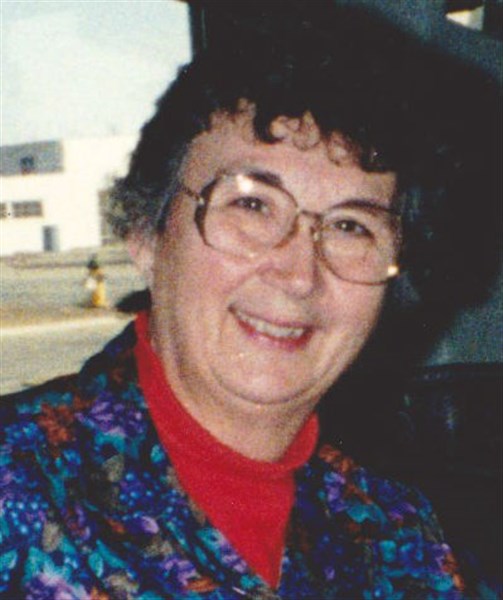 Visitation is at the St. Gabriel’s Catholic Church Tuesday, July 21 from 5:00 to 7:00 P.M. and the Rosary will begin at 7:00 P.M. Funeral services will be held Wednesday, July 22 at 10:00 A.M. at the St. Gabriel’s Catholic Church in Zearing, IA, with Pastor Rick Dagit officiating. Following the services she will be laid to rest at the Sacred Heart Cemetery in St. Anthony, IA.

Hazel Marie Yocum was born April 22, 1935 to Cornelius and Maxine Mitchell in Van Cleve, IA. She attended and graduated from Searsboro High School in 1953, and shortly after began working at the Vernon Company in Newton, IA. Hazel met the love of her life William Yocum at the Forest Park Ballroom in Marshalltown, IA and married him on November 21, 1956 in Newton, IA. After a brief period of living in Newton with her husband Hazel moved to a small farm north of St. Anthony, IA. There Hazel and her husband William would start their family of which would end with three children and numerous grandchildren. While living in St. Anthony she worked as a secretary at the veterinary office in Zearing under the direction of Dr. Walker, and later, Dr. Chuck McDaniels and Gerald McDaniels for 18 years. She took great pride in her work, and she dearly loved and enjoyed her job for the time she was there.

Hazel was an amazing wife, mother, grandmother and friend. She loved spending time with her many family members, and watching her children and grandchildren play sports. There wasn’t a dull moment in her presence, and she was never afraid to let the people around her know that she loved them. Hazel loved visiting with anyone who would give her an ear to speak to and she always had something worthwhile to talk about. She was a true example of what a decent person in our time looks like, and was an exceptional role model for her children, grandchildren, and the countless others she touched with her life.

She is preceded in death by her parents Cornelius and Maxine Mitchell, and her brother Raymond Mitchell.

Fredregill Funeral Home in Zearing has been entrusted with the care of Hazel and her family.