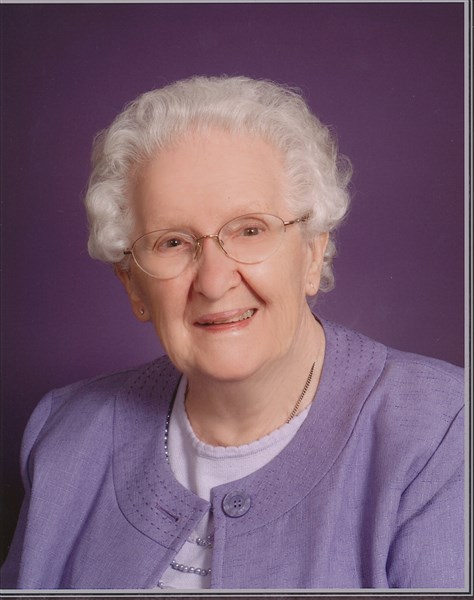 Gladys Dekker, 96, of Grundy Center, Iowa, died May 25, 2015, at State Center Nursing and Rehab Center in State Center, Iowa, while under the care of Care Initiative Hospice.  Mass of Christian Burial will be held at 11:00 a.m. on Monday, June 1, 2015, at St. Gabriel Catholic Church, 21275 U Ave. Reinbeck, IA.  Burial will follow at Rose Hill Cemetery. Visitation will be held from 9:30 a.m. to 11:00 a.m. on Monday June 1, 2015 at the church. Memorials may be directed to the family. On-line condolences may be posted at www.abelsfuneralhomes.com.

Gladys Lucille was born February 16, 1919 the daughter of Glenn and Florence (Saint) Vinton in Hardin County, the eldest of ten siblings.

She graduated from Whitten High School in May of 1937, and two years later, she married Joseph Dekker at Sacred Heart Catholic Church in LaPorte City, Iowa on January 28, 1939. Gladys and Joseph welcomed one daughter, Janet Elaine Dekker on October 18, 1944.

Gladys was a devoted homemaker, wife and mother, as well as being an employee of Funks Hybrid for a number of years. In addition, Gladys was a cook for Grundy Center Schools. She retired from this position in 1981, after 19 ½ years of serving beef and noodles and a cheerful smile to countless schoolchildren.

Gladys remained active in her community, especially within the Sacred Heart parish, where she was a Forester and a member of St. Monica Study Group. When she was not involved in church activities, Gladys could often be found in her garden tending to her raspberry bushes, or playing bingo and cards with friends. She always made time for her family, and was a beloved attendant at numerous grandchildren’s and great-grandchildren’s concerts, plays, birthdays and ball games.

Gladys’ wise advice, her dry sense of humor, and her famous butterscotch pie will be sorely missed by those she leaves behind, including her daughter, Janet (Jon) Edler of Melbourne, her brother Robert(Karen) Vinton of Whitten, three grandsons, Jed (Mara) Edler, Justin (Darci) Edler and Jeff (Stephanie) Edler, many great-grandchildren and many nieces and nephews.