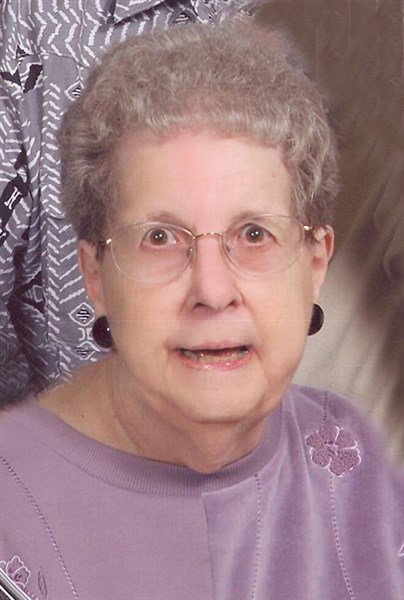 Funeral services will be held 10:30 a.m. Wednesday, August 20, 2014, at St. Paul Lutheran Church in State Center, with Pastor Joan Swander officiating.  Burial will follow in Hillside Cemetery, State Center.  Visitation will be held at the church on Tuesday from 6-8 p.m.  Condolences may be sent online to www.ryanfunerals.com.

Born May 19, 1931, in Winterset, Iowa, Naomi Dawn (Jorgensen) Weuve was the daughter of Max and Amy Dawn (Armstrong) Jorgensen.  She graduated from Ames High School in 1950, then was employed at several area businesses, including Motor Sales & Service and Bledsoe’s Clothing.

On January 11, 1953, Naomi married Ross Weuve in Ames.  The couple made their home in Ames for twelve years before settling on the Weuve family farm northwest of State Center where they raised their family of three children, Gary, Kim Dawn, and Kevin.  Most recently, Naomi made her home at Story County Senior Care in Nevada.

A member of St. Paul Lutheran Church in State Center, Naomi enjoyed cross stitching, baking, and antiques.  She enjoyed her many collections and also was an avid Chicago Bulls basketball fan and Iowa State Cyclone enthusiast.

She was preceded in death by her parents and a brother in infancy.

Ryan Funeral Home of Nevada has been entrusted with the care of Naomi and her family.  Memorials may be directed to St. Paul Lutheran Church in State Center and to the Israel Family Hospice House in Ames.